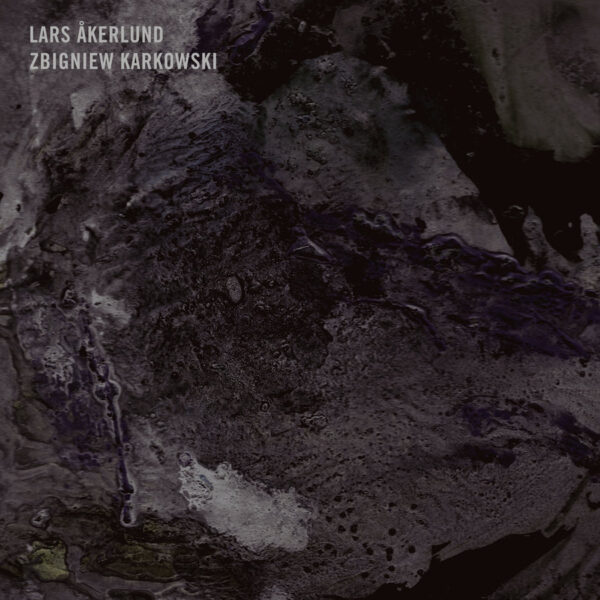 On the split LP FYLP 1037 from Fylkingen Records, we hear one of the last team-ups between Lars Åkerlund and Zbigniew Karkowski, two past masters of death-dealing noise. Between 2012 and 2016, you couldn’t get a melon between these two – they would drop everything for a good collaborative project, one of which crossed our threshold in the form of Horology, a 2013 escapade (with Jean-Louis Huhta) where they took horrendous liberties with the Buchla synth system that’s housed in Stockholm. Gustav, the old janitor at EMS studios, hasn’t been the same since that fateful day…Further materials from that session may have surfaced on the double CD from Sub Rosa, disappointingly called A Bird In The Hand Is Worth Two In The Bush, but we never got a copy of that. Looks like my ears won’t be turning into grey mush just yet.

Åkers and Karkers – as they called each other familiarly – had a partnership dating back to the late 1980s, when they made a record as part of P.I.T.T. with The Dreamers and released it on Carl Michael von Hausswolff’s Radium 226.05 label. That Drakon item from 1989 might not have been cut from the same cloth as today’s jet-black dark droner, leaning more towards tribal rhythms and inspired by industrial nightmares of charred metal. We might say something similar for the grisly Mental Hackers LP, also released in 1989 on the same label, which featured Karkowski and a number of drumming Swedes battling it out with bass-playing Swedes, all of them out-staring each other in a contest of grim scowls and baleful glares. Later the duo formed a trio with Dror Feiler, and also realised an avant-garde opera based on The Idiot (by Dostovesky). Whatever next? Flash-forward to 2012, when those Mental Hackers jokers resurfaced at an “acclaimed” concert in Fylkingen, after which Lars Åkerlund and Zbigniew Karkowski were inspired to create this split LP. It would turn out to be Karkowski’s last project – as the sleeve note penned by Daniel Rozenhall points out, evidently seeing weighty significance in the fact.

For his side, Lars Åkerlund created ‘Aware Not Aware’. Round these parts we mostly know Lars for his Xenon record of 2011, a solo emanation that caused sales of gas cannisters to fluctuate wildly in some parts of the world. Here, he creates reverbed droney menace for 23 minutes, murmuring in stern manner and varying the pitch as needed – now hard, now soft. The sharp dynamics of the piece give it some variety, but he doesn’t do much to earn these dynamics; they are forced changes, not organic ones, and the general ill-conceived nature of the piece means it just ends suddenly after several dreary passages of motor-boat puttering. A very dismal motor-boat, going round in circles on a sluggish grey ocean, with only a skeleton for a passenger and an emaciated loon behind the wheel, piloting aimlessly.

Zbigniew Karkowski’s ‘Radio Enemy’ is more satisfying. For the most part, he uses the simple trick of distorted voices passing through extreme amplification, creating the effect of the short-wave radio set from Hell. For as long as I can remember, which isn’t very far, the short-wave radio has been a familiar tool in the hands of many, from industrial music denizens to dark ambient dabblers of all stripe, and it’s a convenient way to create instant fear and paranoia in the listener. I wonder if we all have some shared memory of being a serviceman in an imaginary Cold War, receiving these unwanted messages from the wrong side of the Iron Curtain. If we have, it may account for why the Conet Project recordings continue to strike such a raw nerve on the collective psyche. Karkowski however has his own take on this marginal “genre”, and he pushes it far beyond the limits of tolerance, as is often the way with his extremely testing near-physical noise assaults. The human ear struggles to decode these hideous messages, but in vain. The piece gives way to a slightly more subdued episode for its final third, almost entering a pastoral zone of tense chirping and hissing, laced with small sound events which may be radio signals we stand a chance of understanding. However, the mood is no less pessimistic, and ‘Radio Enemy’ will not leave you with a smile on your lips nor hope in your heart. If this record is indeed an epitaph to the mighty Karkowski, it’s not an unfitting one. From November 2016.