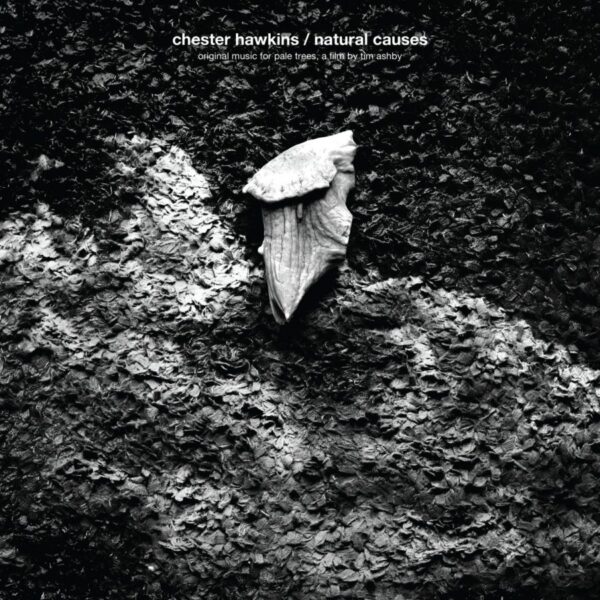 Last heard from Chester Hawkins, the Washington DC synth genius, with his 2015 solo release Apostasy Suite – a vague parody of the Catholic mass in music that indicated the trend of Hawkins’ mind towards some sort of ritualistic purging. He’s back again today with Natural Causes (INTANGIBLE ARTS IA019), an LP which doesn’t quit over two continuous sides, amounting to 44 minutes of soundtrack music for the film Pale Trees made by Tim Ashby. This film is still making its mark on the festival-arthouse circuit at time of writing, and it’s not quite clear what themes it might be tackling in its weird storyline, apart from an interest in ghosts, buried memories, and skeletons locked away in a family closet. To do justice to this semi-supernatural subject matter, Hawkins has summoned up all the “dark ambient” forces he can muster from his impressive array of vintage synths, and also enriched the production with field recordings made in the forest to bring the scent of the earth and the pine cone to his LP. He calls them “deep-woods” recordings, in fact, apparently made in Rock Creek Park, a National Park which lies north of Wash. DC. As forests have figured significantly in fairy tales and dark folklore for several centuries, this was an inspired move; one might say no other choice was possible. The cover photos, in stark black and white, may be sourced from said locale, and convey ominous sensations of dead bodies and burials. As a final touch, he painted his tongue black and wore an undertaker’s suit while making the record inside a mortuary. Not all of these facts are accurate, but you get the idea.

The album itself almost divides into two halves, with the “melody” on the A side and the “atmospherics” on the flip, but even that is too simplistic an assessment as the main musical theme reasserts itself towards the end of the suite, thus creating a satisfying whole in the mind of the listener as said theme re-emerges with a certain triumphant flourish. Despite the slightly macabre undercurrents, Natural Causes is not an especially morose record, nor does Hawkins ever fall back on conventional pre-sets, lazy drones, or instant effects to achieve his aims; instead all the music feels solid, through-composed, and assembled with the deliberation of an architect. It certainly has a sturdy backbone, unlike some flimsy electronica drones I could name. Equipment fetishists may slaver with envy over his list of keyboards, which include assorted Korg and Moog branded devices, but once again Hawkins demonstrates it’s the imagination and skill behind the machines that matters most when the rubber hits the asphalt.

On his press note, Hawkins makes plain his debt to “kosmische” and “krautrock” music, and declares this record to have derived in part from his understanding of the “sonic textures of the 1970s Berlin-school kosmische drone and the more experimental side of krautock.” If it weren’t for the internet I wouldn’t know that this school is associated with the music of Tangerine Dream, Klaus Schulze, and Manuel Göttsching, who happened to be based in West Berlin in the 1970s. The aim of that label is to distinguish the music from the more rhythm-hungry types of Dusseldorf, such as Cluster, Can, and Neu!, and “Berlin kosmische” is seen by many as one of the progenitors of ambient music, as it has now become known. Hawkins doesn’t neglect rhythm completely on this record though, as side A marches along to its own ponderous and robotic tread with a solidity and weight that is distinctly Teutonic, yet clearly filtered through the mind of an American, an American who mentally overlays the landscapes of Caspar David Friedrich with paintings from the Hudson River School. I mean there’s a real understanding of the sheer ruggedness of the forest, which comes across in almost every passing moment of Natural Causes, and a trait which would be welcomed by Walt Whitman and Thoreau alike. From 22nd December 2016.