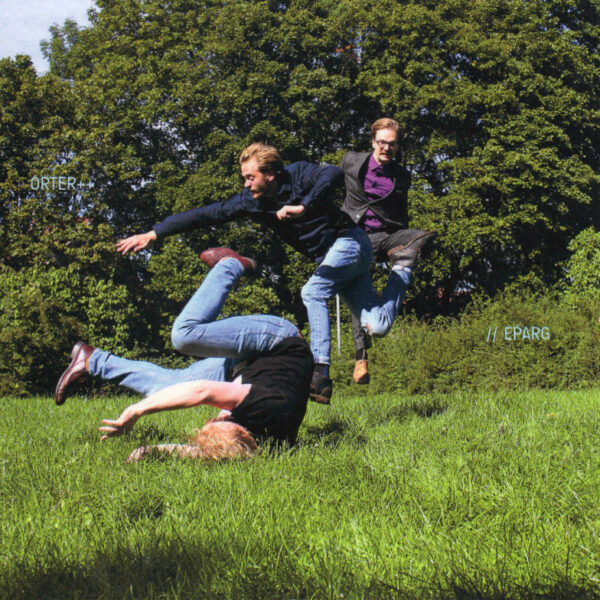 Norwegian jazz is thriving just now, if the available evidence is anything to go by…you may know how keen I am on the work of pianist Kjetil Jerve and his playing in Lana Trio, and there’s still a record I must get around to called New York Improvisations which he personally sent us in December. In the meantime Jerve plays piano in the trio Orter, with the bassist Dan Peter Sundland and drummer Andreas Wildhagen and here’s their nifty album Eparg (ØRA FONOGRAM OF 110).

If you’re not keen on the excesses of free jazz nor the icy extremes of minimal improvisation, then Eparg might be the record for you – Orter are not afraid of tunes and melodies, and there are enough near-poppy pieces on here to persuade you to investigate the entire back catalogues of Dave Brubeck and Bill Evans, put together. In particular the opening ‘Couch Surfer’, which is six and a half mins of unalloyed pleasure, with its bright and confident delivery concealing its ingenious complexity. Then there’s the three parts of the ‘Catapult Suite’, which should convince you our Norwegian friends don’t lack for a sense of zany humour. So far there’s a real snap and spring to every piece, evidence of the compositional skills of the bass player Sundland, and an uncluttered approach from all three performers – no unnecessary frills or showing-off.

Final third of album sees the trio joined by synth player Liz Kosack on the cuts ‘Ooort Cloud’ and ‘Sekstant’ – a move which might have led you to expect a throwback to the time of Chick Corea’s electronic excesses in Return To Forever. On the contrary, Kosack plays the most understated lines you could hope for in this context, adding not only a refreshing tonal colour to the trio sound, but also contributing a faintly melancholic undercurrent to their otherwise upbeat stance. This is particularly true on the ballad tune ‘Sekstant’, a gorgeous miniature which combines gentle abstract noise with a poignant piano melody and stretches of puzzling inactivity. “Joyously surrealistic” is just one effusive phrase from the press note describing this hugely enjoyable record. From 11 January 2017.