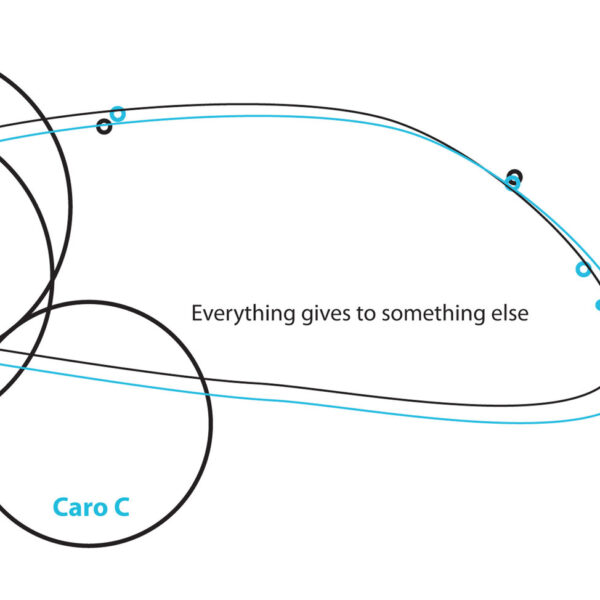 Caroline Churchill is a Manchester-based educator and audio engineer by profession, manager of Delia Derbyshire Day, and self-styled “sonic adventurer”. Here, she presents seven studio recordings and one live track under her new pseudonym of Caro C which apparently replaces her previous alias, Caro Snatch.

The vocal on opening track, “Heartmind Preylude” consists simply of “da da dum” and “whoa-oa”. Her press release describes a “…transparent emotion in the human voice”, which is a puzzlingly incongruous statement as that surely could apply to anything. Personally, pleasant though this piece certainly is, without a clear subject and narrative, it could be seen as a missed opportunity to make something truly awe-inspiring. Interestingly, the third track, “Trust”, has a late 1990s / early 2000s glitchtronica feel about it. This gives Churchill a chance to showcase her impressive studio production skills. Although, I’d have perhaps preferred less vocal activity because her instrumental components are lovely. I feel sometimes the vocals complicate matters. This material is of course presented as “songs” but I feel they might be more compelling as instrumentals, but to Churchill, that is probably not the point of the work. Rather more wearisome is “Kindness”, which features a wordless vocal repeated in combination with piano. Somewhere within the mix I think I can hear someone’s phone ringing. The inclusion of one live performance; “Mammoth Mountain Live 2016” is intriguing. I don’t have a problem with the insertion of a live track within a studio album per se, but in this case it feels like a little bit of a jolt. Along with the stripped down instrumentation of piano and violin, Churchill employs a deadpan style of vocal delivery. The final track “A Plenitude Of Gratitude” eventually loses its sheen along with most of my enthusiasm with its over-use of vocal platitudes and Churchill blithely resorting to the rather unimaginative technique of creating a rhythm by tapping a pencil on a glass through a delay pedal.

At its most effective, her work could be compared favourably with some of the output of Gudrun Gut’s Monika Enterprise label. Possibly, Caro C intends this album to be seen as an edgy, experimental pop album. To me it is more successful when considered as a kind of abstract radio programme of the kind Resonance FM sometimes transmits. Its appeal for me is more as a subtle delineation of what popular music can be in this day and age. Eclectic potential, you could say. BBC Radio 3’s Max Reinhart has described her as a “spoken word sonic enchantress”. The reality of Everything gives to something else is, to me at least, perhaps more prosaic. Far more interesting, I think, is her work inspired by Delia Derbyshire which she uses to promote the annual Delia Derbyshire Day. Check out the excellent “Audient, My Dear” here where she skilfully melds the sound of vintage production techniques with up-to-the-minute modern ones to great effect.