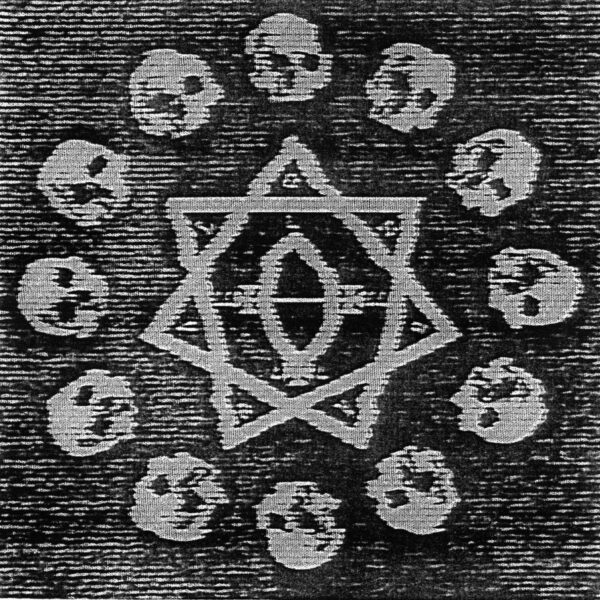 Trepaneringsritualen is the Swedish industrial doom thing whose abject music has long been appreciated in these quarters…Thomas Martin Ekelund may wallow in self-pity and hate when he’s wearing the Trepaneringsritualen mask, but there’s always much imagination and innovation in the way he layers his grisly outpourings, and even some strange brand of near-human compassion struggling to make itself heard in among the ugly, distorted demonic voices. I don’t think I ever got the original issue of Deathward, To The Womb, which manifested itself like ectoplasm in 2012 on the label Release The Bats, in the form of a baleful spectre. Or a ten-inch LP, as some will have it. The evil spirit also poured itself into a cassette tape that same year, released in America by the Black Horizons and Merzbild labels. Here is it reissued by Cold Spring as CSR222LP, both in LP and CD shape, plus there’s a 13-minute bonus cut ‘I Remember When I Was God’ – about which more below.

Deathward, To The Womb has a six-part structure which is somehow pleasing in its symmetry…you can imagine it working very well on the original vinyl or cassette…a sequence which is slightly marred by adding the bonus cut. As “doom” music goes, Ekelund’s brand is highly distinctive in an over-crowded field, and he never resorts to the heavy-handed clichés of feedback, plodding drums, and lower-register throaty growls. The six tracks crawl with morbidity and creeping pain, emerging in the form of threatening and deadly black drone music, alarming percussive blows, and hideous vocal emanations…as with many releases in this “genre”, the words “invocation” and “ritual” spring to mind, and the satanic symbols, mystical images and skulls confirm the malevolent nature of these unhealthy experiments. The press notes here don’t provide much in the way of factual data, but allude to obscure figures named Babalon and Frater T.O.P.A.N., as though we were all familiar with the doings of these mythical wraiths. On the other hand, after 20 minutes of listening, you’ll feel on first name terms with Belial, Leviathan, and other arch-fiends from Hades, so it’s clearly an effective chunk of darkness that does its job.

The murkiness continues with ‘I Remember When I Was God’, which eventually floats off the disc like a grim phantom after several programmed moments of silence. This piece is a new work recorded some three years after Deathward, and once again is intended as a ritualistic summoning of The Old Ones…they even performed it on the same day as an old pagan festival. It features a number of guest players, many of whom like Thomas are probably miserable loners who release their ultra-black doom records in monochrome sleeves which favour nihilistic imagery…there’s the Romanian Alone In The Hollow Garden; the Finn Antti Litmanen, appearing here as A.I.L.; the German death metal vocalist KzR; Michael Idehall, who has collaborated with Thomas and put out a few cassettes on his Belaten label; the Dutch composer Nyland II; and Æther, whose work on Edifice Of Nine Sauvastikas we have noted here. “To destroy and give life” was the avowed aim of these seven spooksters as they met by moonlight inside a charmed circle. The resultant piece is strong on atmosphere and terror, yet somehow not as purposeful as the solo Trepaneringsritualen concoctions, where the creator proceeds like a sorcerer or Magus wrapt in concentration, working without interruption to follow his diabolical aims. From 20 January 2017.