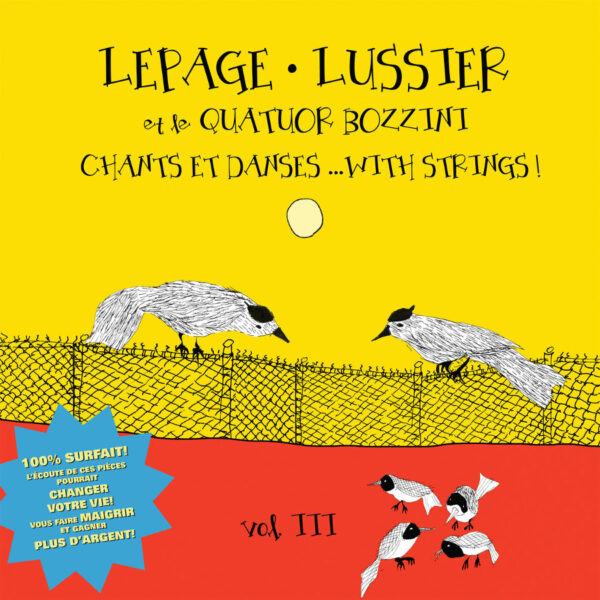 Canadian players Robert Marcel Lepage and René Lussier team up as Lepage-Lussier on the album Chants Et Danses…With Strings! (TOUR DE BRAS TDB9010cd). On these 13 tunes, we mostly hear the duelling clarinet and electric guitar of the duo, though for some pieces extra avant-gravitas is added by Le Quatuor Bozzini, the notable Canadian string players led by Isabelle Bozzini, whom we heard previously on the records Hommage a Leduc, Borduas et Riopelle, and their rendition of Aldo Clementi’s Momento. From the cover artworks, I’m getting the impression that Lepage and Lussier intend Chants Et Danses…With Strings! to be something of a lark, a gay spree, as indicated by the pop-art colour schema of the front cover with its inserted blue star motif making it look like a package of washing powder. “Listening to the pieces can change your life!…and earn you more money!” is my translation of the tongue-in-cheek boast here. I can’t think of any other improvised record where the creators have stooped so low as such a crass non-joke to promote the music, but no matter. The light-hearted spirit extends to the titles of the tunes too, and the liveliness of the playing (sometimes bordering on the frenetic) indicates these pieces are to be taken as caprices in musical form. However, both players are still committed to blowing and twanging in the free-improv spirit, and there’s a lot of atonal clashes, insufferable tootling, and plain ugly guitar noise to get through before you get to the good stuff. When the pair learn to curb their excesses and stop indulging their musical tics, there is a lot of solid musical conversation-making going on. The addition of Le Quatuor Bozzini might have become a mixed blessing in the wrong hands, but where they appear, the musical combinations are strong, and the overall effect is strangely compelling and unusual. From 24 January 2017.