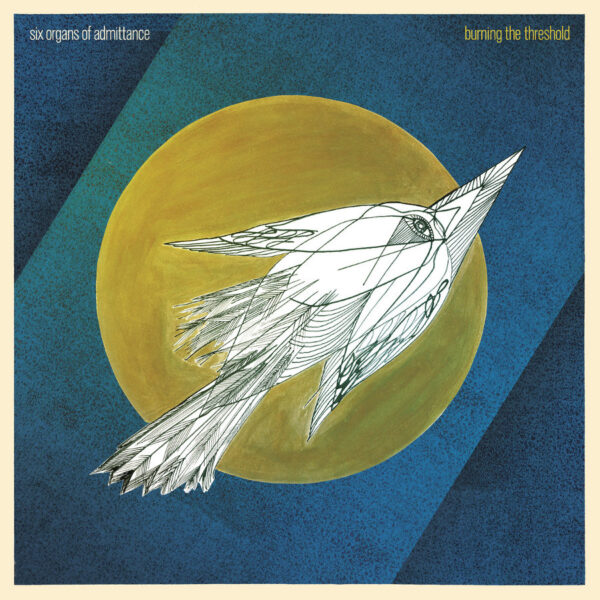 I’ve enjoyed the amped-up rock guitar complexity of Ben Chasny on the fairly recent Hexadic album, and within the trio Rangda where he manages to emerge unscathed from stringed duetting with the formidable Rick Bishop…in guitar terms, the musical equivalent of slugging it out with Hemmingway. Burning The Threshold (DRAG CITY DC 664), Chasny’s latest release as Six Organs Of Admittance sees him going back to acoustic guitars, melodies, songs, and regular rhythms, a direction which could be regarded as a return to his “roots” ever since he released those early mystical-exotic acoustic guitar drone albums. He’s joined by a number of skilled cohorts, namely keyboardist Cooper Crain, the drummer Chris Corsano (also from Rangda), Damon & Naomi, Ryley Walker, Haley Fohr, and others. There is much to admire in the assured finger-picking intricacies of Chasny, and he plays with conviction throughout; for those, myself included, who enjoy his dabblements with esoterica and mystery, the opaque lyrics will do much to satisfy your leanings – especially on the title track, which could be read as a compacted lecture on the practice of alchemy, delivered in under five minutes. Now that I listen harder, it’s his eerie disembodied singing voice that conveys much of that sense of ancient mystery and wonder, especially when overdubbed with unexpected harmonies. On the other hand, if you want Leo Kottke-flavoured American folk tunes taken at a brisk tilt, then tunes such as ‘St Eustace’ and ‘Around The Axis’ (where he duets with Ryley Walker and the sparks fly like June bugs) will be your bag of herbal tea. A refreshing set of impeccable, crystal-clear performances and sparkling up-front recordings. From 11 January 2017.