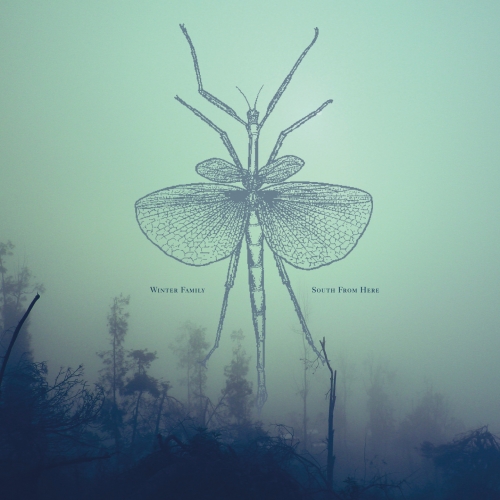 Winter Family is the duo of Ruth Rosenthal and Xavier Klaine, and describe themselves as an “Israeli-French duo living in blood between Paris, Jerusalem & Brooklyn”. While they debuted for Sub Rosa as long as seven years ago, we never heard them before until this release South From Here (ICI D’AILLEURS IDA121 / ALT.VINYL AV073), a highly unusual set of songs which are largely uncategorisable in genre terms, and near-impenetrable as to their themes, meanings, and intention. Me, I like the upbeat numbers with the spare electronic rhythms, the dumbed-down drum machines, and the abrasive vocals; these tracks are ones that most resemble some form of neo-folky electropop thing, for which Winter Family have coined their own term – “Weird Wave”.

While everyone and his dog continue to namecheck Alan Vega and Martin Rev as an influence, this is one of the few instances that come close to delivering on the promise. It may have something to do with Ruth’s mannered and slightly crazed approach to chanting and singing, where she pushes her voice into realms and registers far outside the normal comfort zone, and comes across as an “avenging angel” figure like we always hoped Siouxsie Sioux would turn into. What I mean by this is her stern and accusing tone, every syllable fired like a bullet, carrying an unmistakable threat of vengeance even when we can’t make out a single word of the lyrics. Yes, heavy distortion is another weapon in their sonic bag of oats, and I’m all for that too. The duo also attempt slow-form ballady things with wispy ambient sounds, whispered vocals, and bad poetry; this quasi-Goth strain of theirs appeals to me far less, but there’s enough of the punk-inflected clatter and noise to keep me happy.

The record was made with a combination of synths, beatboxes, old keyboards and pianos, with occasional contributions from guests, friends and family. From 31st January 2017.