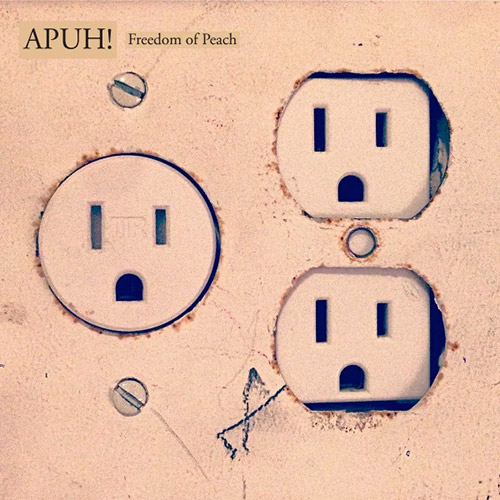 Swedish jazz hands APUH! strike me as a worthy trio of locals who occasionally find time for international jaunts. The whimsically titled Freedom of Peach was recorded throughout their 2016 US tour and gives the impression of peak performance within tight time frames, with the whole show only just passing the half-hour mark. Thus we have a group either only occasionally interesting or ultra considered as to what remote listeners need to hear. The set opens and closes with displays of Ayler-esque ebullience – sax man Adrian Åsling Sellius summoning the spirits with ascending exhortations of unbridled fervour, but such are red herrings in an otherwise down-to-earth primer on contemporary jazz mores: ‘Mr. MD’ might have Miles’ initials, but the main theme probably slunk out of sessions for the first Lounge Lizards album. In APUH’s hands its tight phrasing surrenders to deconstructive entropy as perfect group synchronisation melts into a spell of wheel spinning improvisation. ‘I Wanna Be A Bird’ shows the group cutting loose from such tendencies, aided in no small part by lightning tight drummer Hampus Öhman-Frölund’s firing out energetic bursts like a one man battalion. If you were running towards the enemy, he’s the man you’d want covering you. On such evidence, the group is both controlled and occasionally inspired, but they could do with more reconciliation between the fits of brilliance and the impressionistic scribbling.