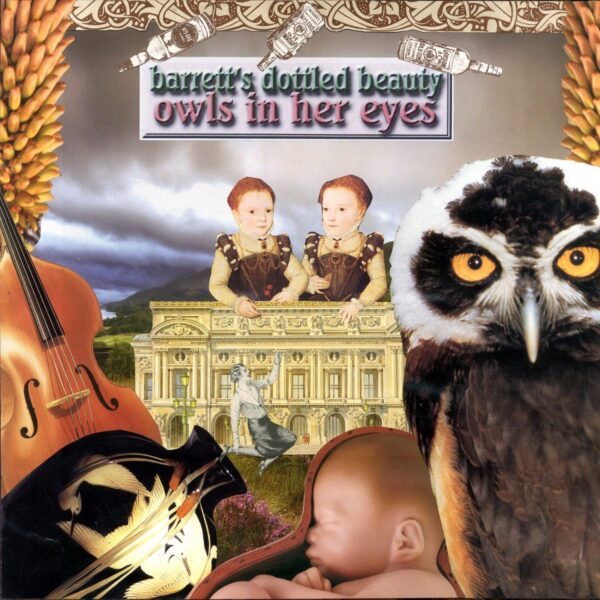 Now for some delightfully fey and wispy psychedelic acoustic folk from Aberdeen. The duo of Barrett’s Dottled Beauty is our old friend Gayle Brogan of Electroscope and Pefkin, last heard in these quarters with her Liminal Rites CDR; and Alan Davidson, who has been trading for many years as The Kitchen Cynics and self-published a sizeable chunk of product on his own label Les Enfants Du Paradiddle. Owls In Her Eyes (ENF110) is their second release as a duo following 2016’s Living For The Moment, and the first to appear on vinyl. It’s a beguiling set of four long dreamy and droney tunes; while Davidson croons his plain-spoken homilies and proudly parades a crisp Scots accent you could set your watch by, Brogan issues eerie magickal near-wordless wails into the microphone propped up with the space-echo unit from Planet X. They do this with musical backdrops which start out as something that stands a chance of being mistaken for traditional folk music played on acoustic guitars, but quickly transmutates into a slightly creepy form of acid-fried psychedelic cosmic drone, remorseless in its minimalism and lack of variation. Don’t be fooled by the gentle, unassuming manner of this pair; they are putting you under a deep trance spell as surely as a witch and a warlock. John Cavanagh (also of Electroscope) did the mastering, and the collage cover by Alan works hard to cram as many symbol-laden and talismanic images into a small space as is humanly possible. Ethereal, uncanny, charming. From 11 January 2017.