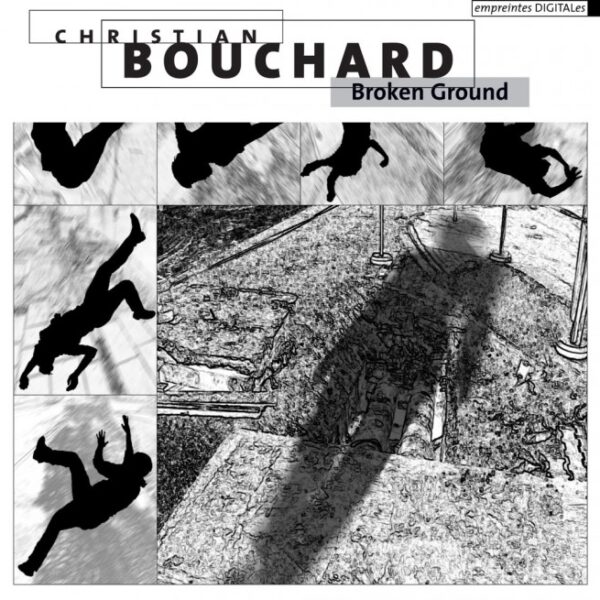 Enjoying Broken Ground (empreintes DIGITALes IMED 17141) by Christian Bouchard…this award-winning Montreal composer studied under Yves Daoust and has been involved in a number of cinema and installation projects. Matter of fact, this present album could be one of them. It’s the soundtrack for an exhibition put together by the visual artist Derek Besant, and the music premiered in Brighton in 2012. Besant is full of interesting ideas…Broken Ground is an attempt to do something with urban environments and address the way they are changing with non-stop development and profound infrastructure shifts going on everywhere. That is not an especially original idea, but I like Besant’s take on the theme, when he talks about treating urban sites as stage sets with “props, actors, exits and entrances”, and how this helps him perceive something about the underlying laws of chaos. I can’t say that Bouchard’s music exhibits the same intellectual depths, but he is trying hard to get into the spirit of the work. The titles in this 12-part suite all refer to phenomena which may be familiar to highly advanced architectural scientists who observe the decay of buildings, such as ‘Intergranular attack’, ‘Kinetic Friction’ and ‘Low Cycle Fatigue’. Or they may simply be invented. Some of the pieces are bolstered with distorted speaking voices, women rattling off what sounds like scientific data, and these factual fragments are effectively collaged into the work, giving it some added sense of authenticity. There’s also a kind of open-endedness to the music which is refreshing, unlike the majority of over-cooked and hyper-dense works we often hear on this label, which exhaust me with their overladen abundance in digital form. If Christian Bouchard wanted to leave the listener with the impression of glimpses of the future and speculative ideas about what is happening to the fabric of modern cities, then he has come close to succeeding with his enjoyable and ambiguous electronic music. From 31st January 2017.