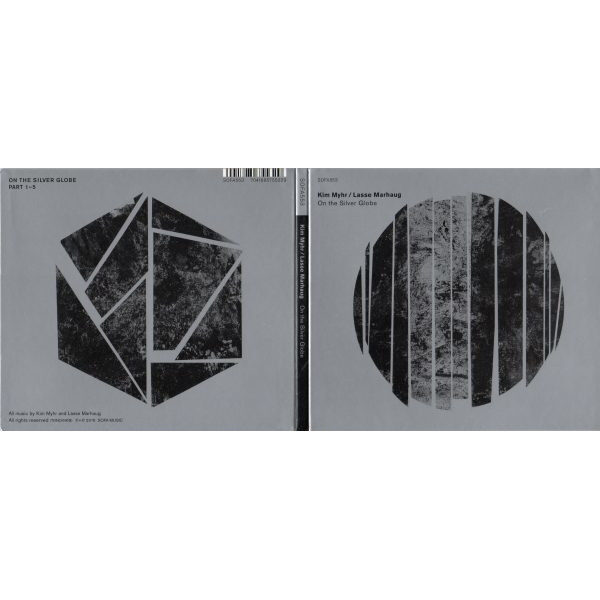 On The Silver Globe (SOFA MUSIC SOFA553) is a quite nice studio concoction of electronic and electro-acoustic work from the team of Norwegian players Kim Myhr and Lasse Marhaug. Myhr is a renowned improviser and jazz guitarist whose work sadly hasn’t made a significant dent in our noggins as yet (his Bloom album for Hubro seemed too diffuse). Marhaug is a prolific creator with exceptionally wide-ranging musical tastes, and a very able fellow; he makes everything he does seem easy. While we used to laud him for his abrasive noise music in the late 1990s and early 2000s, it’s probably fair to say he’s moved well beyond such labels by now. They did this Globe thing originally as an eight-channel piece for an arts festival in Trondheim. The Meta.Morf festival is a big deal, an internationally renowned event which presents a mix of art and technology, in what I assume is a futuristic setting that would shame Expo 67 or other similar world’s fairs, and it’s great that Marhaug and Myhr played this gig. I suppose the eight-channel version was a sound installation, offering an immersive experience with sound elements moving around a large space. That installation isn’t what’s on this CD, though; Myhr and Marhaug remade the work in stereo for this release.

Since the theme of the work was inspired by space travel, it must have been a good fit for the science-and-art confluence that is so important to Meta.Morf. In this instance, there are two sources explicitly cited, but I don’t think the creators are intending much more with their sound art than an impressionistic footnote to the sources. The first is a Polish movie called Na srebrnym globie by the director Andrzej ?u?awski, somewhat notorious among film buffs who collect “lost” films; though made in the 1970s, it was suppressed for years by the Polish cultural affairs minister, who thought he was watching a veiled comment on totalitarianism. The movie didn’t surface until 1988, finally allowing audiences to savour its allegorical and symbolical resonances. I never saw the film, but the synopsis makes it sounds like a cross between Stalker, Zardoz, and Planet of the Apes, only far more earnest and dour in tone. I know that Marhaug for one loves obscure cinema, and I would credit him with seeing the film which has lent its title to this album.

?u?awski’s life was seriously damaged by this debacle. You could perhaps say the same about some of the NASA astronauts, who were never the same after going to the moon. Which brings us to our second source, a book by the American journalist Andrew Smith. He wrote about the American astronauts who travelled to the moon in his book Moon Dust, very much pitching it from the human story-telling angle; what was Neil Armstrong really like as a person? Serious scholars of NASA history have been disappointed by Smith’s impressionistic and subjective viewpoint; other readers have found it compelling and original.

However, I struggled to find a trace of either source in the tepid, abstract sludge that is On The Silver Globe. No symbolism, no politics, no allegory, no science fiction, no ruined lives, no NASA, no human stories about astronauts; for the most part it’s hard to even connect it to outer space, which after all is supposed to be its primary theme. It’s such a near-blank canvas you could almost read anything into it. I realise “cosmic music” is a cliché these days, but at least Tangerine Dream, Hawkwind and Gong managed to evoke a vision of the galaxies, or suggestions of space travel, in their powerful music, however prosaic that vision may have been. On The Silver Globe lacks sufficient content, and just seems detached and passive to me. This isn’t to deny the exemplary studio craft that has gone into its making; the instrumentation included a rich mix of guitars, analogue synths, oscillators, and various approaches to digital processing and reworking, and the production skills have resulted in a unique blend of understated sound. Even without the space themes, I would have liked to have experienced a bit more in the way of events and resolution, but found neither in these formless drifting shapes. I could not hear “the inevitable conclusion in which all cosmic matter is sucked into a black hole” of which the press notes speak. For a more successful NASA-themed piece of music, may I direct you to Promenade D’Été D’Ulis NASA by the Argentinian composer Edgardo Canton, a work of great purpose, beauty, and import.