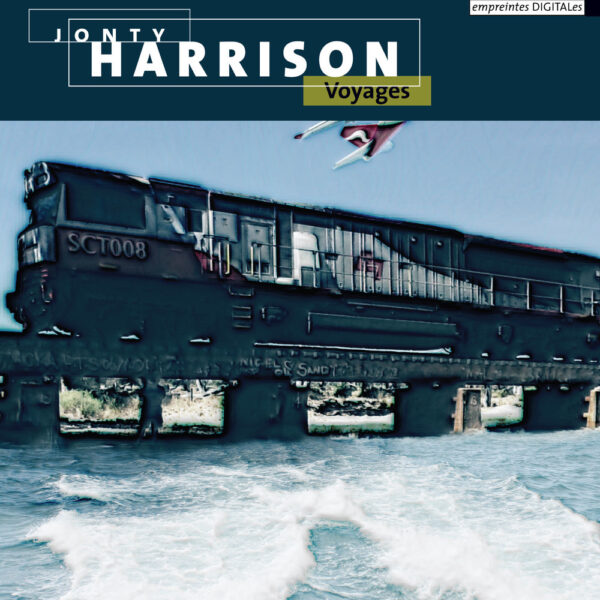 Two not-unrelated electro-acoustic compositions by the English composer Jonty Harrison on Voyages (empreintes DIGITALes IMED 16139). This fellow has quite an interesting history dating back to 1976, when he first started doing sound compositions for dramatic works at The National Theatre, although the earliest work of his that I can find on record is his ‘Klang’ piece which came out on the Interpenetrations LP from the University of East Anglia, an institution which presumably (like York before it) had a dedicated sound studio along the lines of IRCAM.

On 2014’s ‘Espaces Cachés’, Harrison is trying simply to evoke a sense of “space” with a collage of field recordings. This CD presents a version rendered for home use, but if you heard the original composition you’d be impressed by the 30-channel playback over a massive sound system. This experience might create the hoped-for sensations of “you-are-there”-ness that Jonty is aiming for, but on CD it just sounds ordinary. These 14 minutes are not unpleasant, but the choices of sound materials – animals, church bells, fireworks, birdsong – are quite commonplace among phonographers. I kept waiting in vain for something more surprising or revelatory. In his notes, Harrison speculates about how “the bounds of reality can be stretched by the agencies of motion and memory”, a contention which is not entirely borne out by these lacklustre recordings and the flat composition.

2015’s ‘Going / Places’ is a much longer work, where the ideas are explored over one hour in an episodic work. It has its origins in previous installation pieces, such as ‘Hidden Vistas’, ‘Secret Horizons’, and the above ‘Espaces Cachés’. What intrigued him was the possibility of a “geographic impossibility”, i.e. of hearing sounds assembled from many different places in a single place and a single performance. This inspired him to put together ‘Going / Places’, on the theme of “travel”. The 23 segments encompass field recordings from around the world (he carries a recording device wherever he goes, a habit he’s maintained since 1990), and are a mix of nature recordings (forests, animals, insects); people in cities and villages, sometimes making music; and vehicles, mostly trains and railways stations, but sometimes including sailing craft. Mostly trains though. Once again I find the assembly / composition to be quite prosaic and unexciting, and these types of field recordings or variations on them have already been thoroughly explored by many other sound recordists – for instance, Francisco López, Robert Millis, Aki Onda, and just about anyone appearing on the Gruenrekorder label on the last ten years. Unlike all of those however, Harrison does little to transform or sublimate his source materials, and does not convey any sense that he was at all touched or moved by the exciting places he visited, or that he even experienced anything while travelling there. A rather dull and stodgy travel diary is the end result.