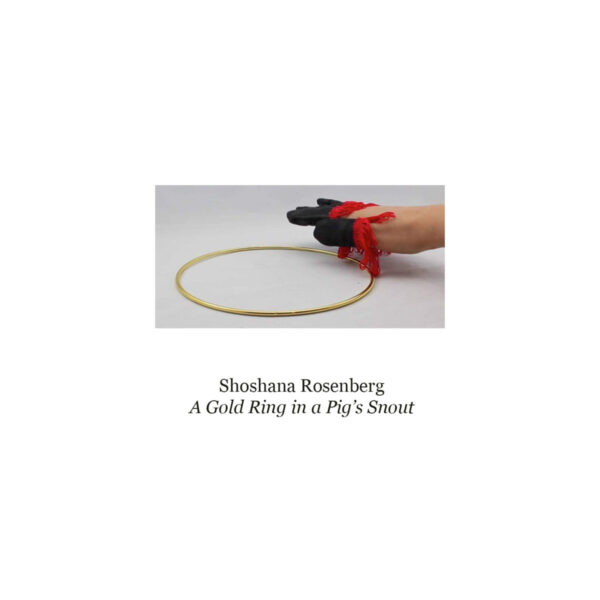 Another item from the Australian Tone List label, a new home for experimental music in Perth. On A Gold Ring In A Pig’s Snout (TL005), Shoshana Rosenberg picks ups her clarinets and blasts forth with five short solo performances, occasionally adding her voice for extra clout and texture. The recording sound quality is quite exceptional; there’s a lot of “room tone” included, giving the set a very natural feel, and at times we might almost be eavesdropping on a private soliloquy delivered in sound. There’s certainly a very intimate and reflective aspect to these performances, and you get the feeling Rosenberg is not one to utter a careless note or make a statement just for the sake of filling up the ether. Slow, considered, and slightly ponderous are the watchwords I would associate with these deliberative performances.

A Gold Ring In A Pig’s Snout is intended as an unequivocally feminist statement, one informed by much passion and near-confrontational political rhetoric. In a punchy piece of polemic, Rosenberg declares that “women have always been fenced in”, suggests that male domination has a history reaching back to ancient times, and goes on to equate repression with physical damage to the body. This is what she means with the tune entitled ‘A True Woman Is A Broken Woman’, and she alludes to the process of self-determination using metaphors of corporeal harm. “A woman is a set of fractures,” she concludes, and explains thereby why she is an adherent of tattoos and piercings. The cover image, with its bandaged fingers and gold ring, drives these points home. The gold ring itself is an image taken from scripture, a text in Proverbs (11:22) which was originally intended as a warning against vanity and lust, and may be read as a variant on the “pearls before swine” motif, but Shoshana Rosenberg has her own interpretation of what she may regard as early Hebrew chauvinism; she sees it as a direct attack on women, likening them to pigs. She defiantly wears a nose ring as a living riposte to what she sees as an historically-inscribed insult to her gender.

In this context, the dolorous music on the tape makes sense as a heartfelt plaint, a mournful but undefeated cry of pain. It is honest and unflinching music, and presented in a clear no-nonsense manner which leaves the listener little room to maneuver. From 6th February 2017.