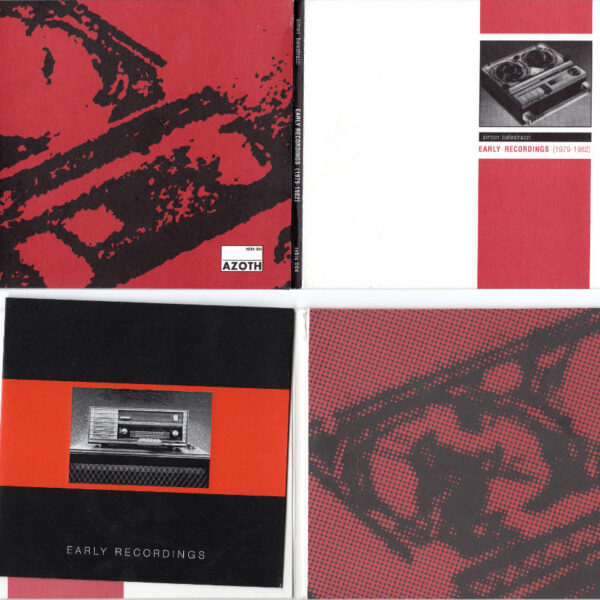 Buried treasure from Simon Balestrazzi, everyone’s favourite Italian prince of dark occult noise music…his Early Recordings (1979-1982) (AZOTH rebis 004) contains nine cuts of primo vintage supernatural horror, featuring the Album Nero and four excerpts from Early Experiments. I’ve always enjoyed Balestrazzi’s macabre emanations, especially when themed on occult-ish matters such as spirits, ghostly manifestations, mediums, poltergeists and other revenants from beyond. These early pieces indicate he’s always been predisposed to such subjects, and here are some of the purest creations realised along these lines; each cut is like a séance, a materialisation of a spirit right there in the room. The other aspect that appeals to me is the use of basic, primitive equipment; more recently he does it with digital processing and real musical instruments, field recordings and multiple layers; here, it’s all done with cheap tape recorders, short-wave radios (natch) and damaged turntables. I do not regard these as limitations, and the younger Signor B. clearly had much resourcefulness up the sleeves of his white cotton shirt.

Some of the enjoyable moments and elements to note: distorted voices, leaking into the mix from old records, tapes, or radio transmissions. An old trick to be sure, but in his hands they truly become voices of the dead, instantly creating the eerie sensations of a visitation, as hoped for. Use of bird song, which features on a few tracks here, and adds an unexpected ingredient to what might otherwise be a deathly, pallid scape. At least a couple of nods to surrealism, not just in the track titles ‘Loplop’ and ‘Strange Birds’ which directly reference Max Ernst (the collage emperor, in anyone’s book). I mean the general junk-shop eclecticism with which he assembles his sources, evidently delighting in “chance meetings” in a far more natural way than Nurse With Wound. This flirtation with the surrealists need not surprise us at all; after all, many of the Parisian group were active participants in séances, and drew no lines between spiritualism, psychoanalysis, and automatism, all of which they took as sources for inspiration and plundered for ideas to make into art and poetry. Some of the above strands come together most wonderfully on the long track ‘Autoritatto Con Teschi’, a hugely enjoyable and carefully-crafted epic, some 20 minutes of gorgeous dream-state wonder with a strange, darkened edge.

The story of it is that Balestrazzi found a box of tapes in the family home’s attic in 2015. He had preserved some of his teenaged experiments on cassette tapes and reels. After a “rescue” mission which involved digitisation of the content, the creator felt able to publish these works, which included his first foray into making a record, the Album Nero from 1977-1980. He regards the work as heavily in thrall to noise and industrial music of the day (which he presumably loved), but I think it is far more subtle than many releases in that genre; the paranormal aspects dominate more than the ear-splitting headache-inducing feedback. Friends who received a copy of Album Nero thought he was a “freak”, leading him to forget about pursuing it further at the time. Don’t forget this was a time when, in his own words, “industrial and noise music were far from well known or even acknowledged in Italy”.

Though he now claims to have forgotten the detail how these tracks were made, he has memories of sampling bits of his avant-garde LPs, including sound poets and items from the Cramps label. The tape machines included a Geloso, an Optacord, and an Ehrcorder; and his uncle’s AM radio set came into play as well. These vintage devices ought to appeal to all DIY fans; just search online for some mouth-watering images of same. The point here is that they were cheap and accessible, allowing Balestrazzi to find entry routes to self-expression quite quickly. While sampling became commonplace later, Simon deserves considerable credit for the bold innovations he achieved here.

Further notes by the artist are in the enclosed booklet, and additional sonic delights – including the brilliantly-titled ‘Short Wave Voodoo’ – await you on the disc. Warm recommendation for this supernaturally-charged slab of vintage voltage. From 16th March 2017.