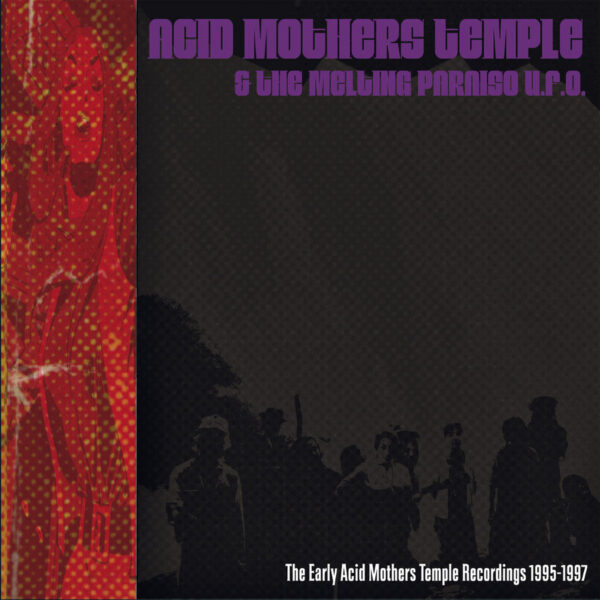 Something stirs… the very keystone of the whole Acid Mothers oeuvre has been reactivated (again). On this occasion though, the run is a little less generous; a limited edition of three hundred, making this one hundred and eight less than the original double l.p. set which, surprisingly, is now of a ten year vintage. This lengthy double c.d. set then, edging just over two of your earth hours, adds flesh to the somewhat hazy beginnings of these other mothers, which started back in the early nineties or thereabouts. This saw Kawabata Makoto, then Musica Transonic’s guitarist of choice, luring various disciples of ‘The Acid Mothers Temple Soul Collective’ (which included dancers, artists, mermaid researchers (?), and professional vagrants), into his new ‘improvising jam band’. The A.M.T. then becoming a going concern, its freak flag mostly observed in a swirling mist of exotic substances. Their early recordings, in the form of limited edition cassettes, which took in pieces by the original cast (Makoto, Keizo, Casino, Hajime) and newly recorded tracks were hawked around by Makoto at Mainliner gigs during an overseas tour in ’97. These tapes later received further adjustments and eventually resurfaced as the A.M.T.’s debut on the PSF imprint. So any thoughts of The Early A.M.T… as a set of demos isn’t really too wide of the mark. It would’ve been fascinating to observe a group that sounded ever so slightly different to the one we’re now so familiar with, but, even at this early stage, the Gong’wind/”Flying” era U.F.O./Trad Gras… template seemed to be the finished article from day one. Though certainly, on a seriously more intense level than Messrs Allen, Brock, Mogg and Persson could’ve ever attained with their respective outfits back in the day.

“From the Melting Paraiso UFO” opens this set and is helmed, interestingly, by the somewhat unfamiliar figure of Johan Wellens. His mush-mouthed profundities becoming strangely out of focus as this multi-pedalled stomp grows around him in size and complexity. A brief moment of search enginuity reveals him to be the label boss of Tokyo-based Tiliqua Records; a second home no less, to the legendary free guitarist Takayanagi Masayuki. Wellens’ narratives can also be found on the chaosmic splurge of “Speed Guru” which has reappeared in various shapes and sizes on later albums, and as a co-scribe on the attractively warped “Rolling Buzz Fuzz Fucker”.

“Zen Feedbacker”/”Candy Aum” (from disc two) puts the listener on the back ear immediately as the respective tracks play simultaneously from the left and right channels (if you so desire). There’s also the wired churn of “Tibetan Esoteric Rage” (surely Raga?) with Makoto’s blaring bagpipes set on stun and the kitchen sink electronic drama of “Aunt Ema Blues”. “Pink Lady Lemonade” makes its first appearance, but is unfortunately, more fluffy bunny than hurtling asteroid. Its lyrical, almost m.o.r. moodscapes really do disrupt the generally accepted norms of motherdom. Apparently “Psycho Line” was dropped from this collection due to being “of inferior musical value…”, can we swap?

Kawabata Makoto: a giggling shaman, Cotton Casino as a space-suited Lorelei and bassist Suhara Keizo and drummer Koizumi Hajime as the indomitable ‘Spock Twins’… who knows what adventures these spaced cadets will encounter in the twenty-first, second, and erm, twenty-third centuries??