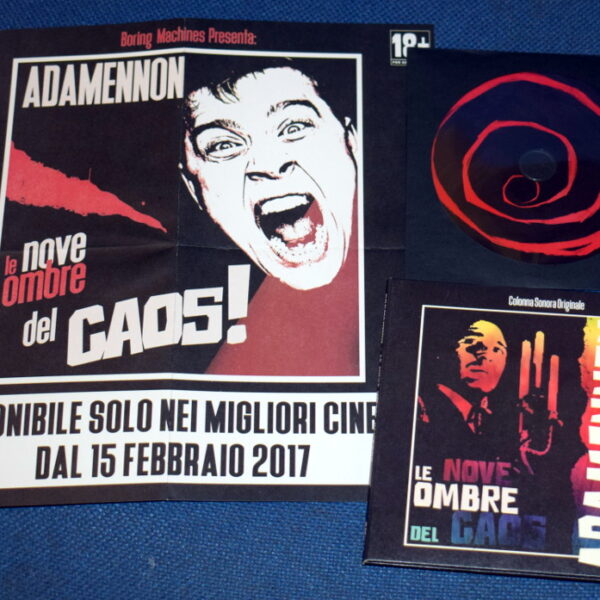 Nice piece of sinister instrumental music from Adamennon, whom we last heard in 2016 on one half of a split LP with Altaj. As you can see from the cover art resembling a film poster, his Le Nove Ombre Del Caos (BORING MACHINES BM074) is intended as a pastiche of Italian exploitation movies of the 1960s and 1970s, the so-called “giallo” genre, as typified by directors such as Dario Argento and Mario Bava. In his music, Adamennon is also paying homage to Goblin, Fabio Frizzi, and Walter Rizzati, and others who scored the soundtracks to such films. As such, he leans heavily on his dark gothic organ, and that keyboard sound dominates the album with its hideous mixed chords and minor key settings, clotting up the air so that you can hardly breath. Some tracks are enriched with excessive drumming, belting out the beats with heavy pounds and multiple cymbal crashes like a more frenetic Carl Palmer, and he also layers in scary chanting vocals to suggest everything from corrupt monks in the vein of Matthew Lewis to sadistic torturers of the Spanish Inquisition, or perhaps Satanic worshippers murmuring a black rite. Thankfully not every track is as bombastic as this, and he can achieve quieter eerie moments, such as the first half of ‘Incontro Scontro…’ which opens Side B.

If any of the above is triggering Black Metal associations in your brain, that’s to be expected – Adam Van Maledict began his work as a BM ambient act in 2006. Some five years later he was also busy digging into the rich seam of Italian progressive rock, and something which the press notes call “dark sound from the seventies”. The 2011 album Nero may or may not reflect these milestones in his record-collecting journey. As for Le Nove Ombre Del Caos, it’s fine as a piece of prog-inflected Black Metal noise, rich with the overstatement and baroque excess we associate with Italian prog, and enjoyable on its own terms even if Adamennon doesn’t really have a sense for a strong melody. As soundtrack music (remembering of course that Le Nove Ombre Del Caos is a non-existent film), I doubt if it would really work for a film; the sound is too samey, and there aren’t really any dynamics or changes that reflect the shifts in screen action. The best soundtrack composers were fitting their cues to the movements of the actors and the camera; Adamennon, conversely, pretty much stays in the same place when he gets going, and doesn’t really know how to bring each piece to a satisfying conclusion. My fave soundtrack LPs often create strong visual impressions in the mind, even when I’ve never seen the movie; but this record does not. He compensates for his lack of narrative skills by assigning highly descriptive titles to each track. In all, a neat little pastiche. From 6th March 2017.