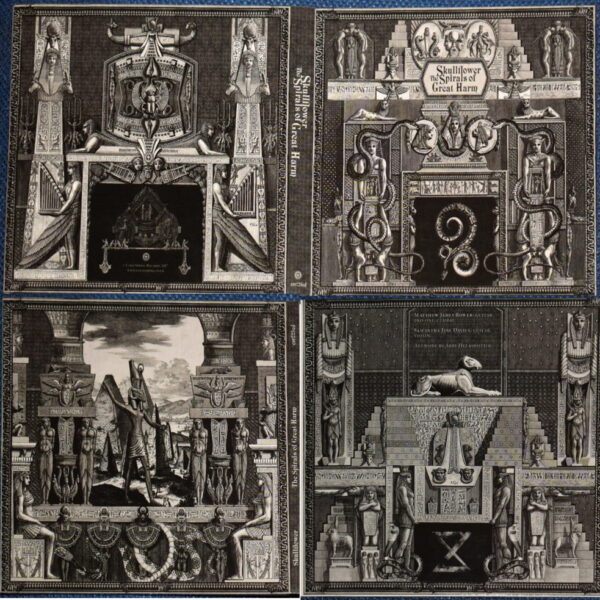 Last noted Skullflower in these pages with their 2013 split with Utarm, where the Norwegian noise act just managed to win the bout by a shaved whisker in terms of “hyper-operatic drama and intensity”, according to Jennifer Hor. We also enjoyed their Fucked On A Pile Of Corpses CD for Cold Spring, where I evidently was inspired by their “dynamic, ultra-psyched, unstoppable guitar malevolence”. But that was in 2011. At time of writing we have their double-CD The Spirals Of Great Harm (COLD SPRING RECORDS CSR225CD) in front of us, where Skullflower are a duo, Matthew Bower and Samantha Davies, and they’re making their vast noise with a combination of guitars, synths (Pro-One, to be specific), violin, and cymbals. At two full discs, there’s a lot of music to listen to here – and I see from their Bandcamp page that Skullflower are not being idle in the self-released file-streaming department either.

The record is apparently themed on a chapter from Dante’s Inferno, and contains bitter complaints against the harsh realities of contemporary life. 1 In its stead, Skullflower propose a dream-world full of dark fantasies populated by dragons and archaic views of history, not too far apart from a pre-Raphaelite painting; in this world of imagination, we could escape the banality of 21st-century urban existence. Completely unconnected with any of these imagistic ideas, we’ve got this superbly decorated six-panel digipak printed in strong blacks and greys with all this Egyptian imagery taken from old engravings and put together by Abby Helasdottir. Somehow it promises much mysticism, journeys to the land of the dead, ancient lore and sheer grisly weight, as of stone pyramids, carved basalt, and other hefty objects from an ancient civilisation. Track titles, with references to Khephra, Yuggoth, Isis and Khepsh further stimulate the esoteric appetite.

And inside the package…thirteen tracks of suffocating, over-wrought drone-noise. Everything is characterised by an excess of layers, far too many instruments all playing at once in a whirling cacophony. The first thing that hits me is the complete lack of any energy in this teeming ball of sparks; no forward movement, each piece staying much in the same place and spinning around in a sluggish whirlpool of sludge-noise. This need not be seen as a major deficiency, but it is markedly different from what I recall of Skullflower’s usual guitar assaults, which had more attack and bite. Not every track sounds identical – it would be silly to ignore the range of textures and surfaces on offer, each created by different means with certain instruments pushed to the fore. But there is a certain shapelessness, with no real definition to any given piece, which means they don’t really stop or start or progress for their duration on earth; each piece of music just hoves into view like some ugly troll squatting on the pathway in the forest.

However, I appreciate that there is effort being made to combine many moods, sources, and musical genres here, so that while there are elements of extreme guitar noise, there are also stabs at something more romantic, emotionally-charged, something even vaguely spiritual – without once straying down the forbidden pathways of “paganism” or pseudo-ritualistic brummagem, strategies that many lesser droners and noisers have elected to follow, almost as a default mode. The band speak of an artistic plan where “all [is] subsumed within our alchemy”, which confirms that this combining-everything approach was planned and executed in a spontaneous and healthy manner, allowing layers to accrue in a natural fashion. I’m all in favour of this “belly of the whale” approach to the creative act, even if this suggests the image of Skullflower roaming the seven seas like Leviathan with open jaws scooping up krill. This may mean that what first appears as an over-homogenised lump of sound in fact contains many hidden layers of beauty, waiting to be excavated. From 20th March 2017.