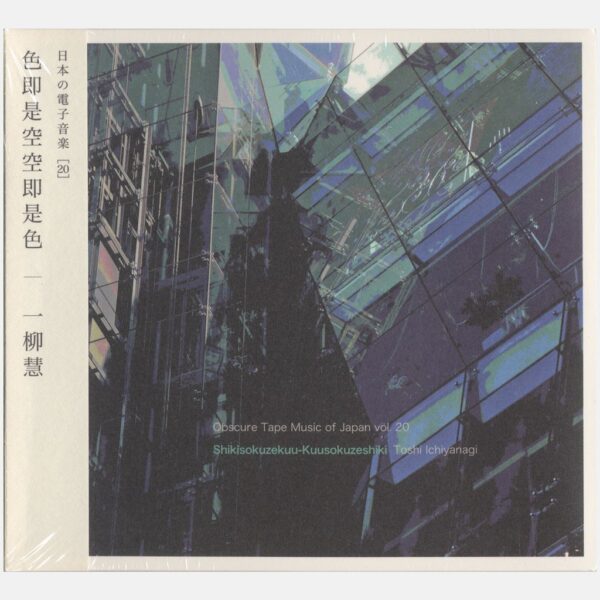 Admittedly I’m late in joining this particular party which in 2015 was onto its 20th episode of releasing avant-garde electronic works by composer Toshi Ichiyanagi. As obscure recordings go, the title track lays good claim to being at the centre of the universe of Obscurity: apparently not much is known about its details apart from it having been recorded at the NHK electronic music studio. Running at just over 33 minutes, this piece is a busy buzzy one that bristles with fidgety energy and which keeps on trotting out new surprises that monopolise your attention at a steady clip. Against a clear background, various noises, tones and drones, and sound sequences that would be familiar in other contexts pass or skip by, revelling in their loudness or abrasive and hissy textures. The overall impression I get is of a steady parade of oddball sounds, all getting their moment to shine, in a linked tapestry.

“Extended Voices (tape part – space version)” is a slightly more restrained and self-coherent (if less varied) piece of swirling and looping space-ambient drones and whistling tones. The music is lively if spooky and possesses a cheeky and subversive sense of humour. Squiggles and spirals delight in surprising and scaring listeners and the most seasoned space-music travellers may feel a little chill creeping up their spines as the sounds slide up and down their silvery rollercoaster.

This volume is quite an enjoyable collection of strange electronic music that turns out to be less forbidding than its abstract and rather dry minimalist packaging might suggest. Anyone not familiar with Ichiyanagi’s work and interested in exploring it would do well to start with this recording and continue from there.

Ichiyanagi’s career in music began in the late 1950s and as far as I have been able to discover, he still continues composing music in several genres, including operas, music for orchestras and chamber music groups, works for piano and native Japanese instruments, various electronic music works and two film scores. He may be best known to Western audiences for having eloped with and marrying multimedia artist Yoko Ono in 1956, though the marriage lasted only a few years and their divorce was finalised in 1963.