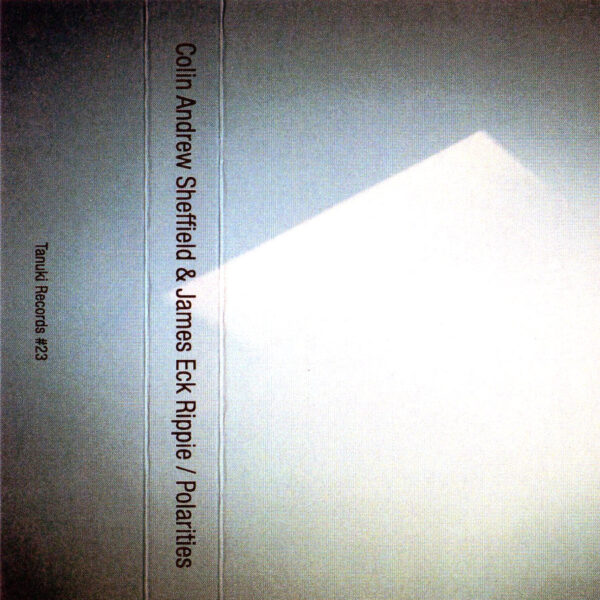 Hot on the ankles of the recent vinyl epic Essential Anomalies comes a cassette tape by the Colin Andrew Sheffield – James Eck Rippie teamup. The cassette Polarities (TANUKI RECORDS #23) was assembled much the same way as the vinyl release, and was built from samples lifted off a record collection that’s presumably about the size of an average retail barn. It’s hard to pin down the method of the two fellows (both living in Austin at time of writing, so it’s possible they met up to create their works), but I think it involves two main strategies – (1) using tiny samples of sound, possibly only a few seconds in length, or less and (2) applying a good deal of post-hoc studio processing and effects pedalling to the results. Both of these actions have the inevitable effect of disguising the sources and covering any traces. It’s the musical equivalent of the “deep-six”. It also comes close to breeding the sort of slippery digital murk that blights my life so much, that endless film of Jell-o that’s far too boneless to ever be called music, and is more like a form of “radiance” which attaches itself to rotting meat. However, there’s not only skill and patience to be admired in Polarities (I somehow have this vision of the two pieceing together samples using a microscope and tweezers), but the overall effect of these two mice-like squealers is impressive, creating a tangible mood that can feel both threatening and uplifting. There’s mystery in them there buckets of murk. In this way, the team transcend the technique of sampling and achieve what every sampler claims to be doing, creating something new out of old records. From 26th April 2017.