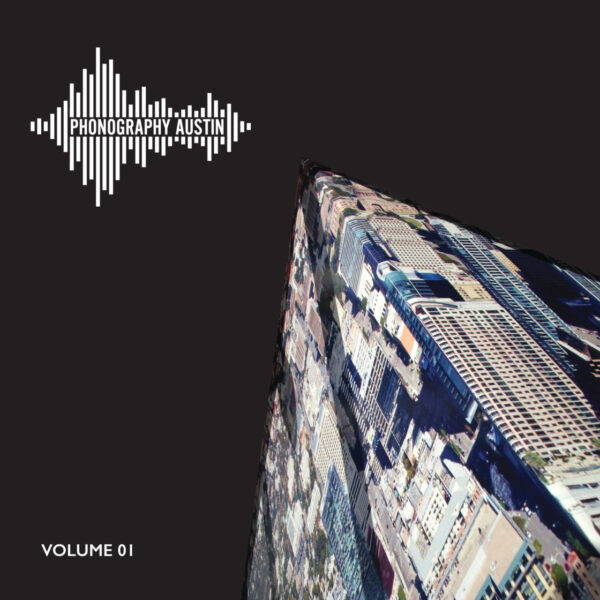 Alex Keller, sound artist from Texas, did the excellent Black Out record which we reviewed here. As a follow-up he sent us a copy of Phonography Austin Volume 01, a compilation featuring eight instances of field recordings by artists local to this area, including himself. In fact these practitioners call themselves the Phonography Austin Group, and their watchword is “authenticity in communication”. Besides Keller, the other name that is familiar to us is Josh Ronsen, who has in the past sent us some instances of his work as Brekekekexkoaxkoax, which is a fluid project sometimes involving other players and shading into group improvisation work.

If these eight do indeed have shared aims, it’s to do with keeping things as ordinary as possible – they don’t want to present “exotic” sounds that might be outside of our “customary existence” as they would call it, and instead find aesthetic pleasure and meaning in daily life. They all do this successfully, though perhaps no better instance of the plan can be found than Laura Brackney’s ‘Greywalk’, which is a simple sequence of urban sounds, traffic, pedestrians and such, captured as she walks from her job to a music rehearsal. Her footsteps are also part of the piece, and in its understated way this piece tells a compacted story in just seven minutes.

As part of the “authenticity” thing, it’s evident that no post-processing is allowed either, so there’s none of that filtering or studio trickery that some composers like to use to transform their source materials. Kevin Sample’s ‘Gutter Rain’ piece feels slightly distorted and at times close to a form of electronic music, but I’m prepared to believe it’s completely untreated; it depends what the rain was falling on (e.g. plastic roof?) and where he placed his microphone. Another piece with a watery theme is T Putnam Hill’s snapshot of ‘Cherry Cover, Catalina Island’, which limns an episode from the point of view of a rowboat (or so it seems to me); it really captures the sense of the instability of the ocean, now soothing, now restless.

So much for weather and the elements. Nature and wildlife are always popular with phonographers, and Keller’s ‘Green Treefrog Chorus’ probably needs no description. As the “chorus” implies, it is very close to a piece of music with its repetitions and rhythms; but he’s also captured something of the atmosphere of this (presumably humid) evening in Florida. Josh Ronsen presents ‘Thousands Of Bees In Box’, which stands out on this comp for possessing the most energy and movement on an otherwise rather tranquil and static set; his textures here positively tickle the ears with their intricacy and complexity.

There’s also Sean O’Neill’s close-up picture of a train passing by, one which fails to excite as much as it could; somehow his microphone missed the weight and power of that locomotive, and the finished piece feels sketchy and unfinished. Junior Williams certainly wins the prize for shortest (less than 60 seconds) piece on the CD, and perhaps the most startling; a fragment from an Orthodox church service in Crete, where he presents a moment of real drama and spiritual conviction, followed by another moment suggestive of family togetherness. A powerful miniature, this one feels very honest. Sadly that’s more than I can say for Vanessa Gelbin’s ‘The Audience’, which is a recording of applause in a theatre. It feels like a cliché, a conceptual one-note joke that’s been somewhat overdone many times before. Even so, it’s clear the Phonography Austin Group remain true to their guiding aesthetic. From 25th April 2017.