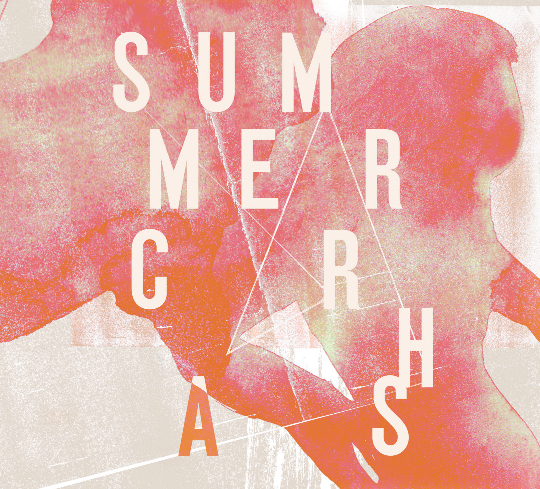 Very impressed with Summer Crash (SINGING KNIVES RECORDS sk026), an exciting document of music / sound art / performance by Maya Dunietz and Tom White, which happens to have been captured when they were touring the UK in 2016 and they stood still long to get inside a studio in Manchester, where Karl Sveinsson recorded them. Here, Maya plays piano and harp, though her principal weapon is her fearsome voice – a deadly instrument that can cause many a hypocrite and poltroon to wither. Tom White is credited with tapes, recordings, and feedback – one might be tempted to peg him as a rugged-minimal electro-acoustic composer, but for his other activities in film and video and art installations. Come to that Maya, born in Israel, is an outside-the-boxer of international renown, working in composition and theatre, doing solo and group works, installations…and her tastes cover heavy metal music, traditional Klezmer singing, and avant-garde classical music.

On ‘Everything Is Soaked’, the duo disrupt our comfort zone from the get-go, constantly fiddling with tape speeds and edits to create a woozy masterpiece from a basic voice and piano piece; utterly mesmerising, strange, and unsettling. On ‘Spare Ribs’, we get an inkling of what would happen if heavy metal stoner rock collided with the exotic world of Yma Sumac; Tom White provides a steady bass-rich throb of evil dimensions, while Maya channels the spirit of Yma at her most vengeful and terrifying. Aye, ‘Spare Ribs’ is a true voodoo charm for the liberated feminist of the 21st century, that’s for sure; powerful enough to melt Donald Trump into a pool of wax. ‘Josephine’, at about four minutes in length, is something of a throwaway in the company of these other long-form explorations, but it’s possible to read it as a deconstructed sea-shanty or 19th century broadside of some sort, with a jangling noise that resembles a broken banjo to accompany Maya’s ghostly singing, conjuring a vision of lost sailors. Finally there’s ‘Summer’, 18 minutes of seething abstraction that’s underpinned by a heartbeat rhythm and laced with strange electronic stabs, creating a backdrop on which the vocalist extemporises her stuttering exhortations and breathing exercises.

The whole album is rich in human noise – voice and breathing – a refreshing change to the clinical digital perfection that so many experimenters seem to crave these days. Let’s have a return to the messy juiciness of humanity, I say. A nice one…fans of award-winning composer Tom White are advised to seek his other noisy escapades on labels such as Chocolate Monk and My Dance The Skull. From 26th April 2017.