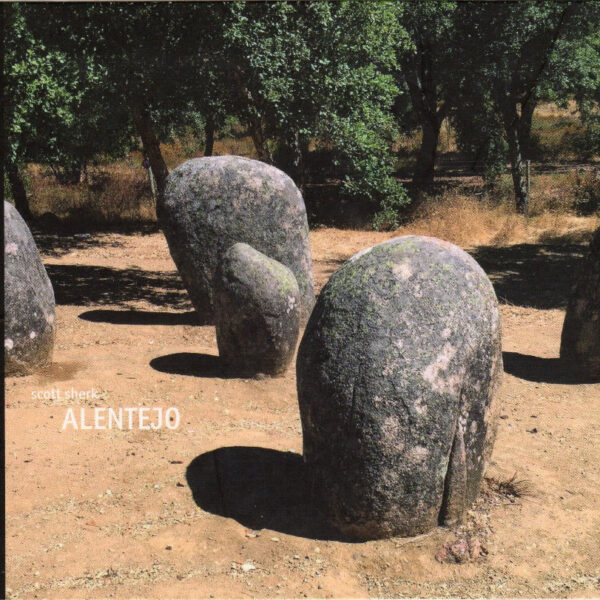 Scott Sherk is an American sound artist who has done installations, sound artworks, and field recordings; he also has a chair at Muhlenberg College. He’s produced some very serene creations on Alentejo (3LEAVES 3L035), derived mostly from field recordings and phonography studies during a residency at this remote part of Portugal (he was in residence at the Obras Foundation). Right away he was evidently attuned to the rhythm and special qualities of this place, which is not only remote and rural but also fairly ancient – prehistoric stone monuments abound, and one of them even features on the cover.

Sherk sought out and recorded some of the most interesting and affecting zones / events in the area, including a castle with stone walls, sheep (with bells around their necks) on a hillside, shooting stars in the night sky, and crickets during the night. Hardly any of these are presented as “straight” documentary recordings, but have been treated – very gently, and with sensibility – with studio post-processing effects. This has the effect of turning them into a form of minimal music. One example would be the sound of crickets, where the recordings where slowed-down and time-stretched; the “truth” of the crickets is not sacrificed, and a pleasing drone sound results. The piece made inside the castle, where we can barely make out the faded traces of a conversation rebounding off the stone walls, is also fascinating; an investigation of “pure tones in space” is how he describes it.

Long-time listeners of Sherk have praised his “fine-tuned sensibilities”, and it’s not hard to see why on the strength of this release. His main success is that he’s somehow captured the magical essence of this location, and conveyed something of it to the listener (an intangible by which Chris Watson always set great store); that’s setting aside his compositional skills, and delicacy in the arrangements. Curious listeners may wish to investigate his previous releases for this Hungarian label; 2012’s New York Glyptic, derived from walks around Manhattan, sounds particularly intriguing. From 20th April 2017.