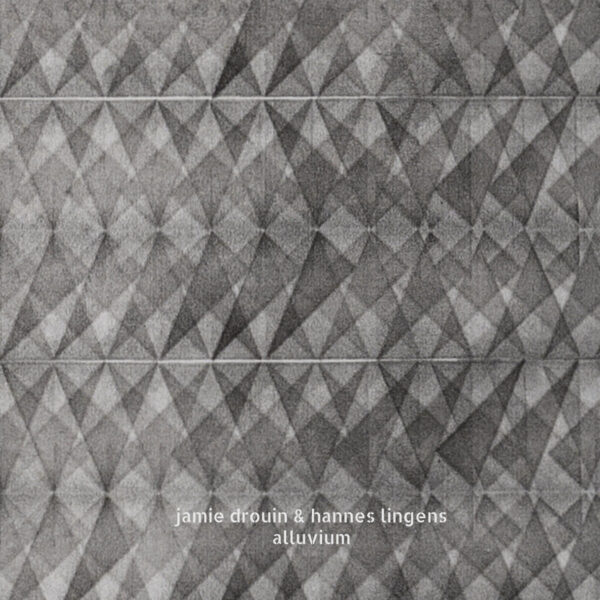 Jamie Drouin is a Canadian performer from British Columbia whose name is new to us…he’s been active for a number of years and is represented on his own Infrequency label with his friend and co-founder Lance Olsen, though he’s also appeared on one or two Another Timbre releases. Here on Alluvium (INTONEMA int021) he plays contact mics, laptop, and radio, working alongside the German percussionist Hannes Lingens with his drums and objects.

The deal for these studio recordings was a “no-monitors” session, and the duo listened to each other through headphones only; this made them more attentive to small details, microtonal sounds, barely-existing events, and such, heightening the sense of hearing when that of vision is gone. There is also a very close melding and inter-mingling of sound sources; for instance, Lingens’ drums were close-miked and used as sound sources by the Canadian, presumably manipulating them in real time through his laptop. In this way they elected to surrender their respective identities, and those of their instruments, to the general ebb and flo of noise production.

Some interesting and unusual sensations are the result; at times the listener is transported to a virtual factory floor where it’s not clear what’s being manufactured, the engineers have gone home for the night, and most of the action is happening 50 feet away from where we’re standing. There’s a nice sense of enigma and puzzlement suggested by all this, but the duo can’t seem to work hard enough to transcend the fundamental flatness and inertia of this largely process-based art. I’m not feeling a strong sense of purpose or meaning behind these vague hums and rattles; their artistic gestures are concealed and muddled by this technique, not enhanced by it. “Cross-pollination” and “blurring the definition” between instruments isn’t really enough of a result for me. From 28th April 2017.