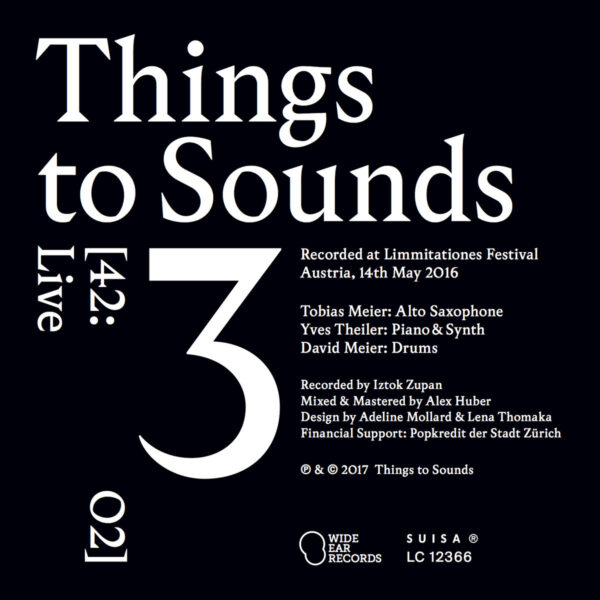 We’ve heard from Tobias Meier in 2016 as leader of the Im Wald quartet, on the unusual record Orion – on that striking piece Meier, the Swiss saxophone player and composing genius, managed to elicit some fatal performances from his players as he cajoled them to stand firm in the disputed space between composition and improvisation. Here he is again as one third of Things To Sounds, a trio where he’s joined by Yves Theiler on piano and synthesizer, and the drummer David Meier.

The album 3 [42:02] Live (WIDE EAR RECORDS WER027) is a non-stop improvised piece, and while on the surface it may resemble a record in the free improvisation style, or something the Cecil Taylor Unit may once have conjured from their darkest dreams, it’s soon evident that the group are in pursuit of an even more refined aesthetic. “Full of tension” is their proud boast, and this album delivers; it’s about as taut as a metal crossbow string. One might say it’s all tension and no release, and the energy feels constrained throughout. It’s like witnessing trapped birds or insects writhing about in a jar, unable to escape. There’s also a dark quality which imbues the overall sound, which I like; it’s not just the low-register piano chords creating this impression, but the seriousness of the tone. All players appear to be dressed in black commando outfits with ski masks, preparing for a jewel heist or a midnight raid on a warehouse.

And then there’s the terrible precision of the playing; Meier’s sax notes are clipped and inexpressive, landing with deadly accuracy on the target like poison darts. His semi-rigid style seems to owe very little to the more expressive Afro-American traditions of free jazz saxophone playing. As to Theiler, he may execute wild piano runs, but no note is blurred, and he’s not presenting an insurmountable wall of blocky mixed chords that could stop a fleet of bulldozers (as Cecil Taylor could often do). Drummer David Meier likewise makes every blow connect with the force of a flyweight boxer; he defeats the challenger in the ring by dint of short, sharp punches and dazzling footwork, rather than going for the TKO. The recording is so icy clear that I’m persuaded I can hear all the drum timbres in his kit, from snare to floor tom.

I have previously dissed another Swiss jazz combo Day & Taxi for making jazz that was too “correct and tidy”, a rather undiplomatic remark on my part, but in this instance the Swiss Protestant temperament is certainly working in favour of Tobias Meier and his men in Things To Sounds. A very detailed and dense work, which will replay further listens. From 28th April 2017.