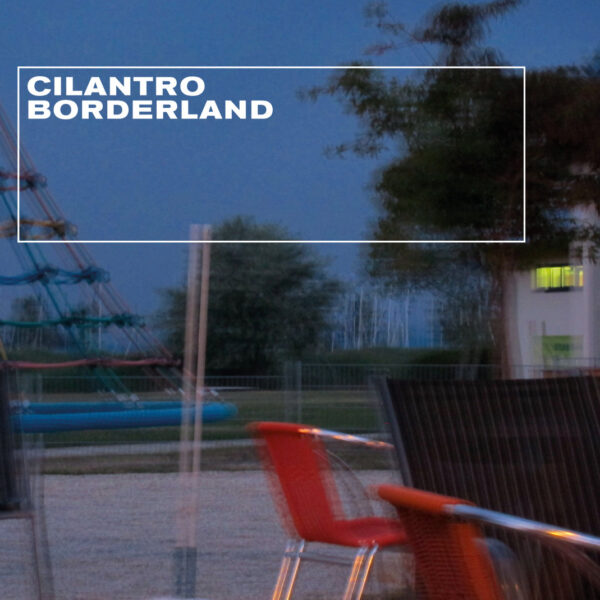 Borderland (MIKROTON CD 53) is a really great record of lucid-dreaming surreal sound-driftery from Cilantro, featuring the talented team of Angélica Castelló and Billy Roisz, currently active in Austria. We last heard these two on the Scuba CD from Mikroton, and there was the cassette Silvertone E Il Sentimento Oceanico (released in 2013, reviewed in 2016) where Roisz did cover images for this solo aquatic special by Angélica.

Although we’ve heard her mostly in a group improvising context before, I’d find it easier to locate this Cilantro project in the zone of experimental, layered, sound-art where a large number of conflicting sound sources are flung into the same melting pot and have to slug it out as they compete for air, leaving the listener with an abundance of aural event and richness to digest. Of course the assembly method of these two is surely not as haphazard as I make it appear. It takes some considerable skill to marshal so many wild forces into the same corral and still come out smelling of roses. On this occasion we have musical instruments – organ, ukulele, bass guitar, and Angélica’s signature instrument, the paetzold recorder, plus live electronic noises, computer-manipulations, and overlaid tapes (some of them sourced from the TV, it seems).

The duo plough a strange course through all this debris with the calm assurance of a combine harvester, constantly seeking the core of strength that lies at the middle of their destination; as each journey progresses, we become more aware of the sheer strangeness of life, as refracted in these kaleidoscopic images and super-imposed double-exposure photographs. Titles like ‘Whales On Wheels’ and ‘Prinz Wompe’ tend to confirm the surreal intentions; and the label notes speak of “labyrinths, enigmas…dark resonances…memories hidden inside”. I frequently enjoy releases that display this long-form, diffuse and open-ended approach to construction; one of my personal favourites in this area is Nigel Samways, who seems to take us on long walks through entirely fictional geographies. The constructional aspects of Borderland are pure artifice, making it art; the slightly porous method, allowing plenty of print-through and sound windows opening on other sounds, makes it exciting and filled with unexpected collisions. Very good. From 19th April 2017.