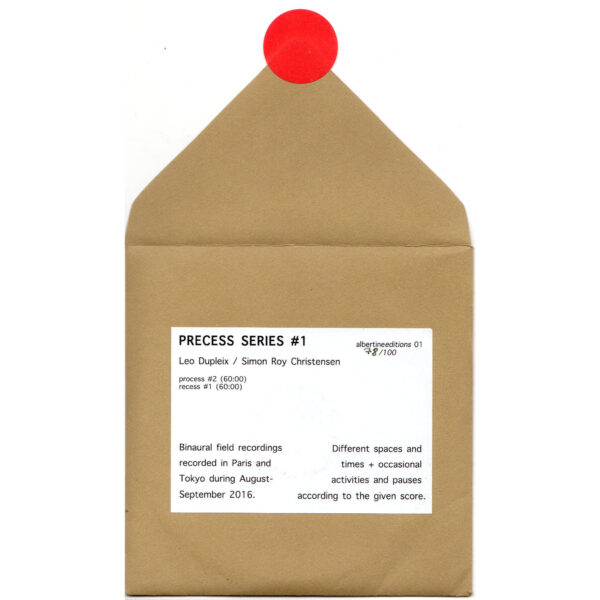 Last noted Parisian composer Léo Dupleix in 2016 with his Two Compositions For Mixed Sources CDR, a set which impressed us with its stark and focussed approach to process noise. It was also the first release on his Albertine label, a small concern which produces limited-run CDRs. There’s only 100 copies of Precess Series #1 (ALBERTINE EDITIONS 01) and it arrives packaged in a tasty envelope made by L’Art Du Papier in Paris. This time Dupleix has teamed up with Simon Roy Christensen from Denmark, who’s a pretty heavy-duty academic type judging by his printed CV here, exploring recondite areas where philosophy, sound and culture may overlap. Two CDs, exactly one hour apiece, document these two doing something obscure and vague in Paris and Tokyo. On the first one, ‘Process #2’, it may be a musical performance, or maybe not. Sounds leaking in from the street and the window are every bit as important as the “work” we have turned up to witness. And in any case, you can listen for over 20 minutes and not hear a single sound that resembles music, improvised or otherwise. Not a single laptop pweep from the pair of them…

This is all a deliberate strategy, of course. The press notes explicitly point out “one cannot really know where sound starts or when music finishes”, and the low-key performances of the pair – when they eventually get started – sound more like two of the laziest furniture-moving men in history slowly dragging a chair across a room, confirming the sense that Beckettian absurdity and Onkyo music can co-exist in the same dimension as a Laurel & Hardy short movie. The tactic of emphasising the street sounds and open window as a framing device is also deliberate, to insert music back into the real world in some manner, to blur the edges between art and reality, much like those conceptual artists of the late 1970s who didn’t want audiences to “notice” their minimal work in an art gallery. And speaking of Onkyo, I am very much reminded of two records I have on the Presqu’île Records label from 2008; those recordings made in Loop Line in Tokyo (where both Christensen and Dupleix have lived and worked) and the Aoyama Book Center were prime examples of very extreme minimal improv, where the tension was enough to drive a man to distraction. Oddly enough ‘Process #2’ doesn’t seek that same degree of taut, agonising expectation, and is content to present listeners with a serene, mysterious portrait of the quotidien, lifting a snapshot of reality from the fabric of time and adding a thin veneer of “art” to the view. A veneer so thin that it goes beyond being transparent, in fact.

So much for Disc one. The second set, ‘Recess #1’, is even less of a thrill-fest if you’re seeking actual sonic “event” and “substance” for your money. The open-window effect is here, but used a bit more sparingly, and there’s a marked contrast between the timbres of sound; for instance, there are moments when we appear to be in a closed room (with all-white walls, I imagine) with nothing but our own breathing for company. The sense of enclosure is palpable in the sound captured, however subtle that may be, and it’s a relief when we get glimpses of the “real world” leaking in. Even less of a musical performance on these grooves than on its sister CD; for many minutes, we appear to be in the company of a laid-back office worker, shifting papers around, in no particular hurry to polish off this month’s invoices. All of this makes for an extremely enigmatic listening experience, and for my money goes even further than Francisco López ever did for its challenging use of silence. Another possible precedent for both these sets is the experiments of Nick Hoffman for his Pilgrim Talk label; for instance his 2009 Psychophagi LP, made with Aaron Zarkutzki in Chicago, is a timeless classic of the “what’s-going-on?” genre, doing its utmost to efface the barriers between recordings of music, sound, and room tone, and presumably bring the audience closer to the music thereby (or alienate them even further).

Looking again at the cover of this release, I realise I’ve expended nearly 700 fatuous words stating what is summarised far more concisely by the creators’ own phrase, “different spaces and times + occasional activities and pauses according to the given score”. That really does say everything – it’s composed, there are actions, there are silences, and they take place across time and space. And just look at that masterful use of the Plus sign (+), implying a mathematical precision to the work. Without doubt this sort of work takes John Cage’s ideas and extrapolates them to produce something a thousand times more effective and resonant. From 20th April 2017.