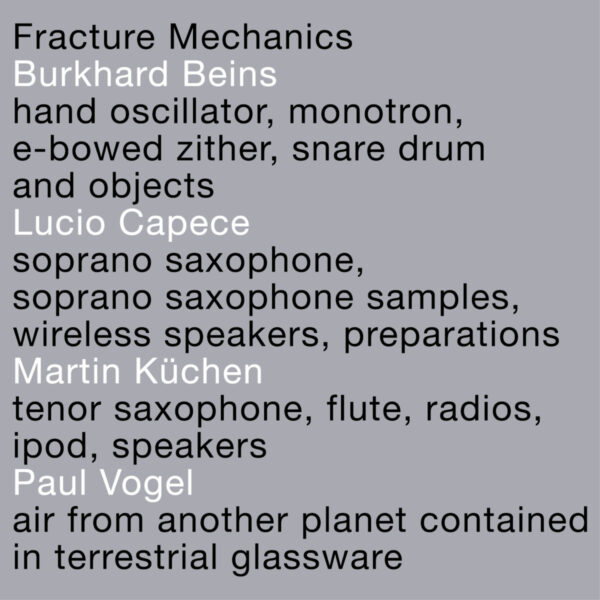 Superior quality session of electro-acoustic improvisation from an all-star quartet on Fracture Mechanics (MIKROTON CD 56) – at any rate, the names Burkhard Beins, Lucio Capece and Martin Küchen should be well-known to all readers who have been following this strain of improvised music for the last 15-20 years approx. Paul Vogel is a new name to me, though. A percussionist and clarinet player, he’s appeared on a few recordings from the Homefront label, and has worked with Mark Wastell, Lee Patterson and Fergus Kelly, suggesting he’s as much at home with sound-art as he is with free improvisation. There’s also his partnerships with David Lacey and appearances in Chipshop Music, who if nothing else are a group that appear to have a sense of humour about their work.

Fracture Mechanics may be aiming at something quite serious, though. The label remind us that “Fracture Mechanics” is a term that comes to us from the worlds of engineering and manufacturing (not music), and concerns itself with the study of physics of stress on certain materials. To put it more plainly, why do steel girders crack and break? Our quartet of players may be trying to map this realm of study into music, and thus their work constitutes a series of fundamental questions about music and sound itself. To put it more plainly again, how far can they take things before the music itself breaks under the strain? The same line of thought might well apply to the genres we as an audience have imposed on free music – and as a rotten music critic, I’ve already suggested at least two of them in this review alone – and whether these pigeon-holes have also reached their breaking point, or outlived their usefulness. If any of the above holds a grain of truth, then the group have set themselves an ambitious ongoing task, perhaps concerning the nature of music itself and our perception of its cultural worth. The last time we flirted with these deep ideas was I think on our brief appraisal of Polwechsel, of which Burkhard Beins happens to be a member.

The record itself is not an especially “difficult” listen, though. Indeed on moments of ‘Pebble Snatch’, it seemed the quartet were discovering the joy of playing simple thirds and droning happily away with uncertain stabs at chords. But matters do become more complicated as we get further in, particularly on the long track ‘Transmogrification’, which gives me an impression of a strange, halting line of thought revealed in small, precise details; where it’s hard to join ideas together in some way, as though a focus group or breakout group were sketching ideas, words, and diagrams on a flipchart at some abstruse conference. The assurance with which these seasoned players go about the task is a given; we don’t need to tell you how good they are. Where I’m not clear is what territory they’re trying to explore, what points are being discussed, what questions are asked. But I’m certain it’s all pretty important, and deep.

In addition, there’s some suggestion of alchemical processes at work, implied in the tune titles and the press note reference to turning “base liquids into nectar”, though this may not be significant; music writers have been applying the “alchemy” trope to music for a long time now, usually when discussing musique concrète. It may be yet another cliché which, Fracture Mechanics warns us, we need to learn to do without; let’s throw off these mental straitjackets. On the other hand, I can’t ignore the credit assigned to Paul Vogel right there on the front cover: apparently he plays “air from another planet contained in terrestrial glassware”. I honestly have no idea what this refers to. As a phrase, it’s almost poetry, lending an air of alien mystery to the entire record. It may turn out to be something as prosaic as a snow-shaker, but even so I can’t translate it to a known musical instrument. It’s as though Simon Magus or John Dee suddenly appeared from antiquity to start playing the theremin solos in live renditions of ‘Dazed and Confused’. 1 At one point in the olden days, activists like Cornelius Cardew used to warn us about the dangers of “mystification”, and attacked the idea that a musician or composer could hide behind a veil of secrecy by cloaking ideas with what he regarded as flowery, spiritual, language; this sort of thing put unnecessary barriers between composer and audience, he claimed. This credit line alone probably would have given poor old Cardew seizures.

None of this vapouring of mine tells you anything about how the music on this sounds, which although slow and minimal-ish, is somehow far richer than many other outings into similar turf that have crossed our desk in recent years. Best to leave it to Mikroton’s shopping list: “drum-head friction, precise gurgling, conceptually static noises, analog synth putter, ultra minimalism, radio distortion aesthetics, and disassembled wind instruments”. From 19th April 2017.