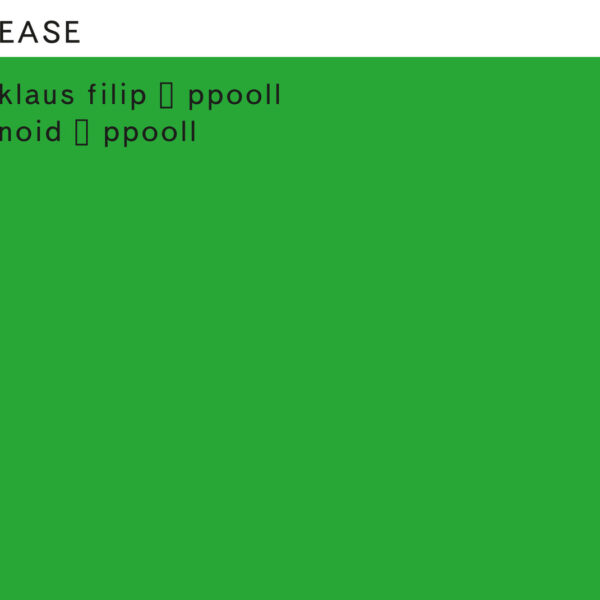 Ease is the duo of Klaus Filip and Noid, playing together in 2014 and 2015 in St Petersburg and Vienna on their No No No, No (MIKROTON CD 52) album. This is all digital and extremely minimal material and the two lengthy tracks here unfold at an incredibly slow pace, leaving traces about as discernible as the footfalls of two mosquitoes in a snowfall. Austrian genius Filip deserves huge credit for inventing and developing the lloopp software in 1998, which grew into its current collaborative incarnation ppooll; I have no idea what this sound-manipulation platform does exactly, although it’s based on MaxMSP and is presumably a boon to laptop users. But whatever visions we may have of Viennese laptoppers and Cologne glitchers doing their 1990s-styled hacks is in serious need of rebooting, especially when faced with music as abstract and open-ended as we hear on this green-covered slice of music, with its gently colliding sine tones and vague pitches which are so airless and light that it appears more like an Alexander Calder mobile than a Rodin sculpture. A very 21st-century update on a mobile, with no recognisable colours, and all the pieces made of a shape-shifting transparent gas, rather than plastic. I see that Klaus Filip has collaborated and improvised with some of the most respected names in improvised music, many of them drawn from the schools of ultra-quiet music, sometimes severe, sometimes almost militant in its insistence on near-silence and imperceptibility. Any list that begins with the name of Radu Malfatti strikes terror into my heart, that’s for sure. We have heard Filip in these pages once only I think, on the Remoto album he made for Potlatch in 2013 with Dafne Vicente-Sandoval, and Paul Khimasia Morgan noted it provided “a barely there-type listening experience…pulsing wisps of sound.” Pulsing wisps! I envy him, owning such an eventful album. When I’m faced with the unvarying slow sine tones of today’s album, I’d give a plate of dried prunes for pulsing wisps.

As to good old Noid, decked out with a name that makes him a candidate for a bit part in Blade Runner 2049, he’s actually Arnold Haberl from Vienna and plays the cello. He sawed his way into our lives with that baffling double-disc set Foreign Correspondents – released on this same label – where he was doing it with Japanese improvisers who also preferred to keep the volume down. Matija Schellander also played a huge part in this record which was as much a travel documentary as it was a music release. Noid is not playing the cello on No No No, No, but is likewise making digital manipulations with the ppooll software. The material he’s manipulating might be recordings of mechanical devices (fans and motors) or nature (wind and fountains), but you’d never know it as all the sound is so heavily treated. “Heavily” is completely the wrong word, though; the sounds may be disguised, but how to convey their lightness, apart from reaching for metaphors of mobiles and air-sculptures that don’t really exist? Both these guys are devotees at the shrine of software, kneeling in the same holy temple of tech. I say this to suggest something of the utter serenity and stillness of the music, much like prayer would bestow on any religious acolyte. I expect both of these stern Viennese types are well beyond religion and faith, though; nothing but strict materialism for them, starting with the dried turnip and ending with the grey slab of concrete.

“Musical atoms”, is the succinct description the label gives for the basic building blocks used on this record. “Abstract spaces and voids” are being created, indicating that the emptiness is every bit as important as the presence. From 19th April 2017.