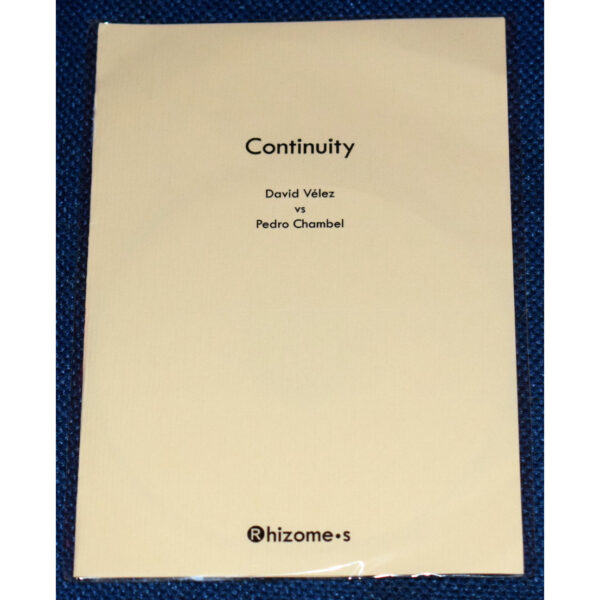 The second of three items from the Rhizome.s label from Pedro Chambel.

The album is called Continuity (Rhizome.s #18). The main event is the opener composed by David Vélez, 43 mins in length, called ‘Memory Measurement Unit’. David Vélez has no connection to Wandelweiser as far as I can see. In fact he’s from Colombia and has been active in festivals and exhibitions for eleven years, some of them in America, plus he has his own record label Impulsive Habitat for presenting far-out musique concrète, and his own journal The Field Reporter which focuses on such works. His intention on this long piece is plainly stated (in brackets): “Repetitive and predictable music meant to be gradually unnoticed”. Man, what a cruel experiment to play on the brain, and the ears. What we hear is like a loop of digital crickets chirping in some far-off never-land, producing a granular tone which is far from unpleasant, but very naggy. I suppose if you listen carefully enough you can detect the repetitions here, but the piece does grow and vary itself gradually by degrees. Your mind might eventually push it all to the background, but it’s very insistent. At length Vélez almost succeeds in creating an entire environment out of this minimalistic method, obliterating the whole world, until only this crackling pulse remains. I certainly love the idea that it could be used to “measure” your memory in some way. I am reminded of structural-materialist film-makers who looped their images in complex systems, with the hope that the viewer would start to recognise certain repeated passages. But the images were so abstract and unreadable, it was really tough work. Same applies here.

Pedro Chambel appears next, with five tracks of his ‘Untitled’. Unlike Vélez who supplies us with a single line clue to his work, Chambel has none of that nonsense. No titles, no explanations. I see Chambel (from Lisbon) has appeared on numerous records with Bruno Duplant (co-founder of the Rhizome.s label, in fact), and sometimes on Another Timbre, but what interests me most is that he considers himself a part-time musician and his real area of expertise is Medieval History. That said, he did study the guitar some 20-odd years ago and may have been drawn in to the free improvisation racket thanks to the composer Vitor Rua. We heard Chambel and Duplant (with Fergus Kelly) on a record called winter pale (red sun) in 2014, and today’s ‘Untitled’ work likewise may have started life as fiercesome electronic sine waves and minimal tones. Repetitions and patterns are allowed in these pulses, but certainly not for the provision of enjoyment; rather the plan seems to be to wear down our resistance through nagging insistence and constant prodding of our brain cells in a highly unwelcome manner. I can imagine Pedro Chambel as a behavioural scientist with an extremely benign manner, smiling peacefully as he buckles a hideous helmet on your head to begin his experiments of brain-sapping and memory-cell destruction. Each of the five pieces here present a distinct tone; one is a shrill high noise, another is harsh noise, a third is ultra-minimal pulses, so there is clearly some sense of order and planning going on here, activities which might be interpreted as a composition. As indicated, it’s presented in a completely explanation-free manner, which is both infuriating and very refreshing. 1990s minimalists, such as Francisco López, Bernhard Günter, and CM Von Hausswolff, start to appear like over-achievers when compared to this blank-faced and stern sound art.