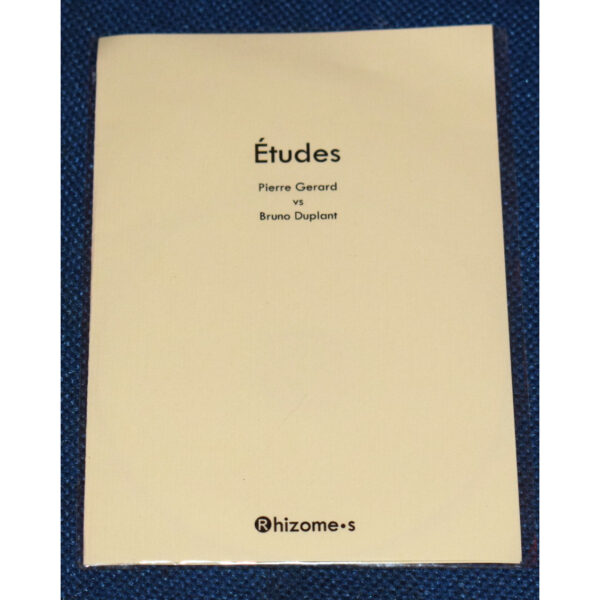 The third of three items from the Rhizome.s label from Pedro Chambel.

The third record is called Études (Rhizome.s #19). The first composition in seven parts is called ‘L’innocence a la verticale (sur la falaise)’ and was composed by Pierre Gerard. This minimalist piece uses a lot of silence and small electronic tones, but also some fragmented materials sourced (in a very roundabout way) from real instruments – alluded to here as “a stringed instrument and a wind instrument”, keeping it unspecified just in case we were tempted to get distracted by detail. Gerard himself adds a cello to the work. Actually the method might not really be that roundabout, but the explanation – the longest we’ve read on one of these releases so far – certainly is, and adds another layer of distancing by mentioning the name of a third party (Luigi Turra) involved in this “sourcing” action. What this amounts to is ascetic, severe, blank. It’s certainly nothing so vulgar as sampling; we’re now in the exalted realms of something much more conceptual, profound, and distilled. The micro-shards of musical information are short and cut-off, only allowed into the body of the composition after passing the strictest possible tests for admissibility. On the surface, I’m reminded of the work of John Wall, who used to be the go-to guy in the UK if you wanted sample-based electronic art music delivered to your doorstep in a highly compressed manner. But at least he made a sound you could hear. Gerard seems to live in dread of emitting any messy aural stains which might mar the clinical beauty of the silence. There’s also the matter of his rather elaborate title, which seems to put the listener in a very awkward situation; as though we have to climb a sheer rock face, like mountaineers, in order to understand or experience this music. You can bet that Gerard would remain unmoved by our complaints and would not furnish a single piton to help us on the ascent of this smooth rock wall. I admit to being mystified. You really must see the Bandcamp page of this Belgian genius; each cover a master-statement of beautiful understated greys.

After this highly challenging listen, we have ‘42 Études (Sans Paysage)’ by our old friend Bruno Duplant. I think this is comprised of a number of short episodes (some of them might have started as field recordings) stitched together into a coherent or semi-coherent whole. As far as it comprises a mosaic-type approach, this might not be too far apart from Pierre Gerard and his cliff face, but Bruno Duplant is sonically richer than his Belgian counterpart and his emptied-out tones. The sounds may not all be compelling or worthwhile, but at least we can hear something. The highly fractured nature of the work is really good, presenting a radio broadcast from a planet where the roving mic of the reporter flies from one alien zone to another in his space-craft, fetching back short audio documents of less than a minute apiece. It’s for the listener to try and thread these disconnected statements together into a narrative of some sort; or perhaps, surrender to the complete random nature of everything. I’m less mystified by now, but still feel I’ve been placed in a metaphysical conundrum.