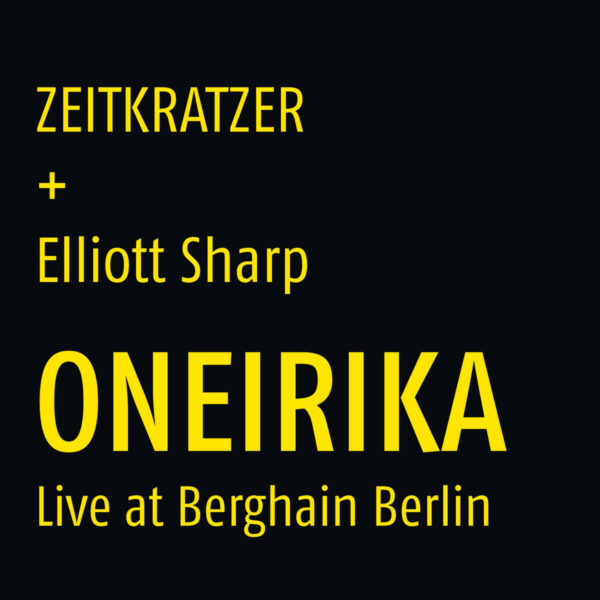 The latest release from the formidable Zeitkratzer Ensemble is Oneirika (zkr0022), which is a collaboration with the American avant-heavyweight Elliott Sharp. He created this thing called variously a composition or soundscape, is credited with conduction, and also guests on electric guitar and tenor sax on this live recording. Meanwhile Reinhold Friedl and his crew supply expertly-performed chamber music on their all-acoustic, but heavily amplified, ensemble of instruments. On the surface level, there’s much to enjoy aurally in the shape of jazz-inflected blat, avant-ish creaks, groans and scrapes, jungle-fied percussion, and free-form whirlings of the sort that many improvisers would give their right hand to achieve. It’s a very rich mix of styles, approaches, and sonic textures.

Oneirika was created using an unusual method, whereby Sharp’s compositions (written as musical manuscript) were processed in the computer application Photoshop in some way. Since this is image manipulation software, I assume this means that what has been handed down to the musicians was something resembling a graphic score (as used to be deployed in certain 1960s avant-compositions), which the players have to interpret according to their skill and judgement. We have noted quite a few instances of electronic musicians who have attempted to recast the data of a digital image (such as a JPEG file) into audio data, and “play” it through a computer, but this usually results in irritating process noise. Oneirika is quite evidently of a different order, and what greets your ears is a hand-crafted, performed work of art of great complexity, detail, depth, and weight. Who better to supply that interpretation than the crack squad Zeitkratzer. And I have no doubt that the hyper-intelligent Sharp knows exactly how much “chaos” he will allow into a situation like this, while likewise allowing the music to thrive on the ingenious and creative responses of the players to their graphically-indicated tasks. We’re also told this method is “inspired by the Cagean tradition”. I’m not entirely sure what this means, but I suppose one aspect of John Cage’s work that might be relevant is his use of wholly non-musical external sources (such as star charts) as a framework to determine musical composition.

I’m more attracted to the word Oneirika. The Greek term derives from a root word which has given our language the word “oneiric”, referring to dreams. The press notes here use the term “waking dream”, which is even more intriguing. Perhaps Sharp, through this complex and ever-changing work, is attempting to convey something of the nature of the dream state, with its fleeting images and rapid-eye movements. Or perhaps he posits an alternative reality, much as the Surrealists trusted to their dreams as an escape from the drear reality of everyday life. Both interpretations seem valid when the music is heard, music which inspires and encourages the listener towards imagination, hopefulness, action. While it defies common sense if you’re seeking a linear, logical argument, this music makes perfect sense on some deeper, more intuitive level (as indeed most great music does, and must). Impressively, the piece avoids any clichéd interpretations of the dream theme, and the music remains hard-edged, tangible, packed with events.

If any of this is so, then the process used for its creation has been wholly transcended; although Zeitrkratzer perform with their characteristic precision and attention to detail, the epic sweep of the music pushes everything into some new, hyper-real realm of dream-like art. If you’ve ever managed to track down the music of Sam Pluta or The Wet Ink Ensemble and liked what you heard, you will certainly enjoy this release. From 12th June 2017.