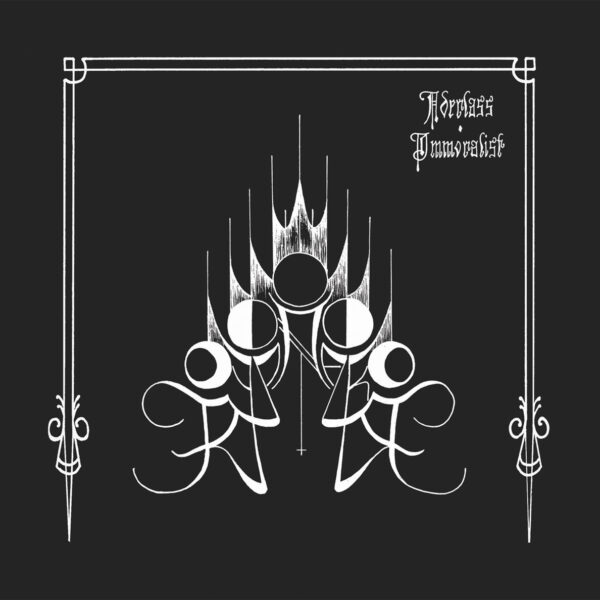 Oooh yeah – this cassette, Resonare’s second release, is sure to resonate with folks who like their black metal deep, gravelly gruff and doomy, and this act delivers those qualities in spades right from the time it leaps from the starting gates. This is a raw and abrasive recording with a strong sound. What’s more, it improves as it progresses and whoever’s behind Resonare – well, I have the feeling that this is a one-man act – gets to reveal more of his talent and skill, especially in the title track which is mostly ambient and experimental in genre and structure.

Opening track “Fire of Clarity” is certainly a fiery and aggressive song, all thundering drums, howling hell guitars and the most gravel-grinding vocals ever spat out by a demon from deep underground, and churning along at medium-level speeds that show off majestic riffs, thumping skins, chuggy rhythms and a dark cold-space atmosphere. All are dominated by a monster voice that for all its throaty gruffness is amazingly clear. “Never Ending Night” starts in a darker, moodier ambient fug – the song starts in an urgent urban-blues style and stays that way before the roaring guitars break in – and is less openly aggressive; rather, it steams along in noise-guitar fuzz ‘n’ buzz and erupts later in demonic scream and melodic guitar cacophony. The song has a more melodic bent and the band’s fire and thunder are held on a tight leash to steam, snarl and smoulder away, and allow the more atmospheric aspects of Resonare’s style to shine through, even if briefly.

The title track comes from a completely unexpected angle: true, the early aggression, if mostly muted, is still there but now the band’s ambient charms take over and dominate much of the track’s instrumental sections. The accordion start should alert you that this could well be an off-beat piece. It plays with listeners’ expectations, diving into unearthly darkspace ambience and deliberately losing the momentum built up from a previous melodic noise-guitar / post-metal blues section, but it’s more orderly than you’d expect, the atmospherics building up slowly and experimenting with tension and space before pulling the plug on listeners and leaving them in audio limbo.

I’ll grant that this recording might have been made to shop Resonare’s talents to various labels; but even if it had been, there’s certainly a lot of talent and skill on show, Resonare demonstrating its confidence in working in different genres and combinations of genres. The production could have been a bit clearer on the second and third tracks to give them a bit more depth and darkness but otherwise there’s not much to fault the songs. This cassette certainly works well as a taste test for a first album – maybe a bit too much so, since it’s good enough that any publicity it attracts is certain to put pressure on Resonare to get that first album out as soon as possible.