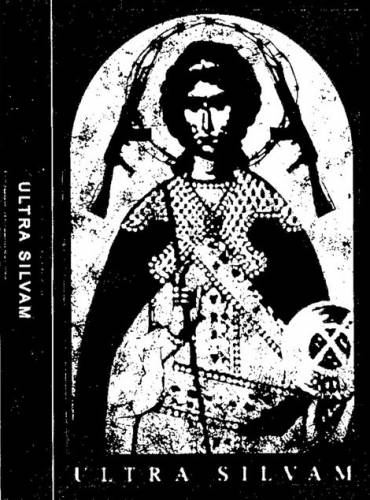 Just a very short recording, true enough, but this tape is jam-packed full of snarling filthy raw thrashy BM complete with gruffy shouty vocals, squealing spitfire lead guitar and the trashiest noise-guitar textures this side of the most humongous landfill sites. At the same time, this trio has an ear (or more) for the catchiest, most aggressive melodies and riffs which have the effect of balancing out the harsh vocals and pounding drums.

The overall sound quality is brittle and rather on the thin side which tends to underplay the trio’s potential for purveying super-charged music of power. You can certainly hear this potential on the last song “A Skull Full of Stars” where the guys go fast as hell scrabbling away on their guitars, turning them into mounds of sawdust. Heck, they go fast and hard on all three songs, thumping away on the tom-toms and the lead guitarist strangling his instrument and forcing it to cough up the squiggliest shrieking drone solos imaginable. “Crooked Horned Prophet” is a solid steady starter laying down a strong foundation for the hectoring vocal and hysterical lead guitar. “Incarnation Reverse” is a more frantic piece with a hint of desperation and plenty of reverb over the vocals which (apart from making the lyrics hard to hear) gives them a ghostly demonic aspect. Yet this is probably also their most pop-friendly song with distinctive melodies, jaunty martial folk rhythms and stirring guitar solos embedded in the noise. The last track carries over the intensity and aggression built up by the previous two songs and brings them up to a dense climax of squiggly guitar chords to leave listeners stranded on a cliff edge.

Perhaps the songs could have been a bit longer and the last track especially is a tease but on the whole this tape is a good fiery introduction to a thrash BM band whose style includes an unexpected punk / rock’n’roll groove.