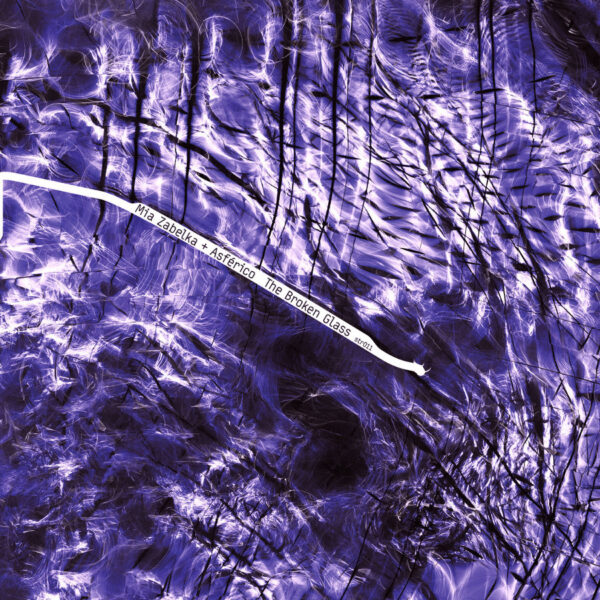 Talented Austrian violinist Mia Zabelka is always welcome in these pages…last noted her for the 2014 weird-some melange Medusa’s Bed album, which she realised with the help of Zahra Mani and Lydia Lunch. For today’s offering, The Broken Glass (STÖRUNG str011), she’s thrown in her lot with a young electronica creator Alex Gámez from Spain, going under the name of Asférico. The two versions of ‘The Broken Glass’ indicate the various directions their music pulls in – V1 is brittle, minimal, art music, where the violin makes cryptic statements in a near-empty chamber of odd percussive sounds and effects. V2 is club-friendly synth sequencing and comforting droney hums, which fill the available space so effectively we can’t quite make out the violin at all. No prizes for guessing which creator dominates the proceedings in these two examples.

Asférico and Zabelka realised these unusual works in their respective studios in Austria and Spain. However, these are just appetisers for the main event, some 40 minutes of ‘Sonidos del Subconsciente II’. Attempting to realise music that corresponds to the workings of the subconscious is usually a good idea. Who knows where the work will take us next? This one is a fascinating blend of field recordings, footsteps, empty buildings – a forlorn violin keening notes out into the metaphysical wilderness, landing on the ears of the indifferent. Beyond this point, it ceases to be something recognisable as “music” in the normal sense, and turns into an understated but monumental piece of sonic exploratory what-not, producing insistent repeated patterns that are completely abstract yet somehow compelling on a deep level. Puzzling…we might be on board an ocean liner in the hold bound for lands beyond the seas, while the unseen crew are doing strange things with the cargo and a hoist in the hold.

This one is not designated a studio based work and was in fact commissioned by the Phonofemme Festival in Vienna in 2015, thence to be “presented” – the word “performance” might not quite be what is required for this piece – at the Wiener Konzerthaus. Result is an impressive piece of ambiguous, dream-like speculative music, probing the mind, coming close to stated aim of activating the processes of the subconscious mind and allowing them to operate freely in a zone of inquiry. From 21st July 2017.