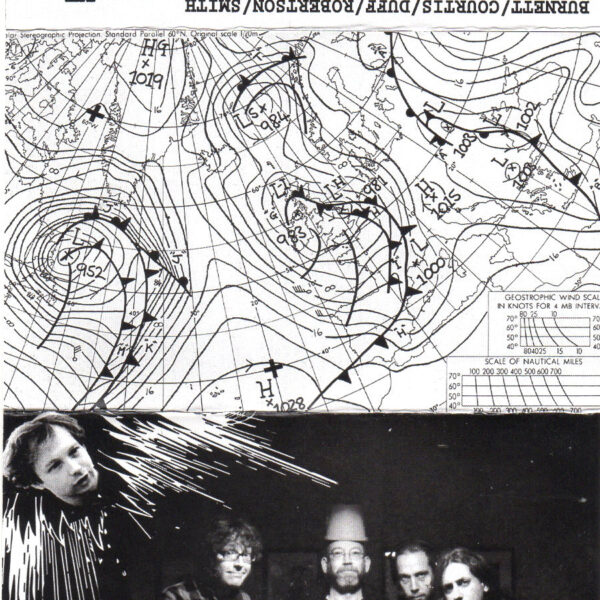 Welcome Hurricane Gertrude (LF RECORDS LF058) was assembled in 2017 by an ad-hoc teaming of Anla Courtis of Reynols and some notable Scots underground noisers – Fraser Burnett, Malcy Duff, and Ali Robertson, all working in the studio of Grant Smith from Muscletusk. We’ve heard Duff and Robertson as Usurper on the jungle-themed cassette from 2017. Welcome Hurricane Gertrude is a piece of murmuring noise-stew which makes no distinction between the weather and the washing machine, an example of free-wheeling thought which is reflected in the titles to these two sides. Apparently Courtis captured field recordings of the terrible storm in early when 2016 when, all reporters agree, Hurricane Gertrude “battered” the Scottish islands. He brought these audio works to the studio where, along with other interventions from the team of players (hopefully junk-based, hopefully using cheap and nasty methods), they were melded together to form the current murk under discussion. “This music is a beautiful meditation on the elements, a refraction of light, air and water all at once,” claims the label. Strongly disagree; there’s no light and air whatsoever in these over-clouded, grey lo-fi recordings, and while the finished piece may represent a fairly convincing portrait of English (and Scots) weather, it’s quite a stretch to call it a “meditation” – it endures and abides, but with zero spiritual fulfillment and without actually reaching any form of Nirvana. One might have hoped for a little more force and energy on a cassette that’s themed on the behaviour of a storm, but it’s little more than a pallid, joyless grind of overdubbed and shapeless elements. I like the ghostly voices on the B-side though. From 17 July 2017.