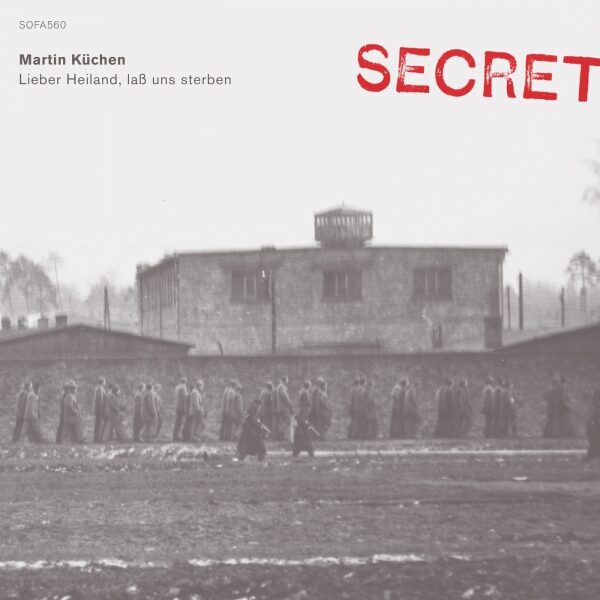 Recently we noted Philippe Lauzier with a very good album of overdubbed bass clarinet playing, A Pond In My Living Room. So happens to have been released on the Sofa label in Norway, which also applies to today’s offering by the great Martin Küchen, whose minimal puffing we also recently heard on the Fracture Mechanics record. He made a couple of pieces on Lieber Heiland, Laß Uns Sterben (SOFA560) using overdubs of his saxophones, although there’s also three live recordings where his sax playing is accompanied by live electronics, tambura drones, radio, iPod, and speakers.

‘Purcell In The Eternal Deir Yassin’ is the one with the tambura and Küchen delivers a languid, smoky curlicued piece of playing tinged with what I would regard as “eastern” intervals in the notes. Yes, he is playing notes, and not simply creating moody tones or breathy atmospheres. The curious title here is great too, suggesting that English Restoration composer Henry Purcell is somehow transported to an important Arab-Israeli conflict in 1948. It’s as though the music were making a holy saint out of Purcell in some way. That’s one canonisation that’s long overdue. The operas of Purcell are engraved into the piece using I think radio samples. A mesmerising oddity; Alice Coltrane would have been proud to see her legacy continued in this way.

The other major “long” piece is ‘Atmen Choir’, one which has a lengthy title too, and was created with “six saxophone voices overdubbed”. Far from being a full-on drone piece in the Phill Niblock mode, it’s a fragmented work where the wispy puffs of sound or swift roars of breathing seem to delineate an unusual structure which we can only apprehend in glimpses, using lines and shapes which vanish instantly. Astonishing to be able to create such evanescent music with such assurance and skill. The structure must reside in Küchen’s head in some way. Prodigious memory feat.

There are also shorter delights, including the title track, ‘Music To Silence Music’ – which is almost like a pop tune in the company of these other puzzles, a beautiful simple melody emerging from in fits and starts from an inspired four minutes of playing – and ‘Ruf Zu Mir’, where he plays very rough-edged and breathy tones which seem to be torn out of his instrument like reluctant bats being pulled into the light from their dark cave. He is briefly accompanied by fragments of romantic piano music from the radio, in moments of perfect happenstance that would probably have pleased Keith Rowe, Stockhausen, and John Cage (and that’s a big ask!).

A superb record from this talented creator; understated yet ingenious ideas, great performances, and a real advance for the genre of improvised music. And to think he recorded it all in one day (in the crypt at Lund Cathedral). According to the creator’s notes, the theme of this album is something to do with how “historical events intersect right into the contemporary sound making, slit through their titles sharp cuts in our listening present era and pry our eyes towards the seemingly inexplicable backyard of history”. The cover image probably contributes to this theme, in ways which I can’t yet account for. From 28 July 2017.