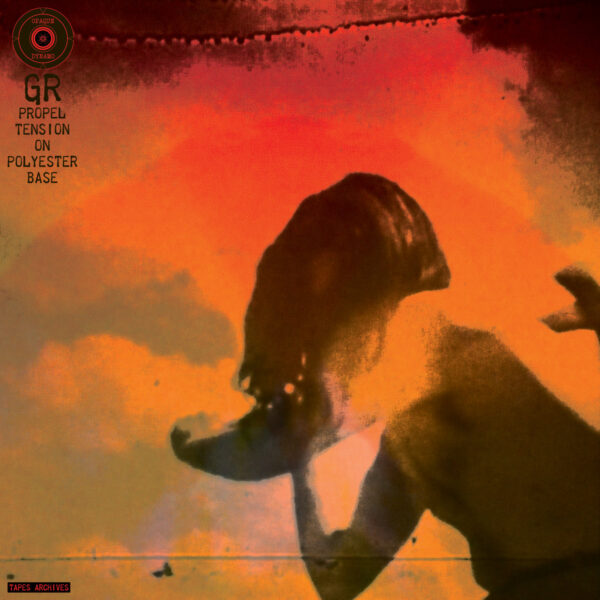 As you may know I am very keen on “one man band” records, where a single musician plays everything on the record through the gift of studio overdubbing. Among my heroes in this area I number Roy Wood, Bill Nelson, Todd Rundgren, Johnny G., and Paul McCartney. It’s also great to hear it done in a genre that isn’t mainstream pop/rock music, so I welcome the LP Propel Tension on Polyester Base (OPAQUE DYNAMO OPADYNO1 – GR01), credited to GR. i.e. French player GRegory Raimo. This LP compiles thirteen works from a long history of solo studio recordings, made between 2008 and 2016. We’ve heard him before on the excellent release A Reverse Age (noted here in 2014) and were impressed; this one is every bit as enjoyable.

His work seems to be mostly self-released, starting in 2007 or thereabouts on the label Lesdisques Blasphématoires Du Palatin which changed its name and now operates as Opaque Dynamo. The German label World In Sound, which mainly concentrates on reissuing obscure prog and psych LPs, took him under their wing for a couple of LPs also. On today’s LP, we can enjoy GR’s no-nonsense approach to making scuzzy home-made guitar punk, which he executes with a natural flair and passion that most musicians would give their eye teeth (right hand, left leg, and entire torso) to possess. The music just flows out of him, like grease from the pores of an acne-ridden teenager. But it’s also enriched with a kind of noxious energy, like black slime oozing towards you. When he sings, or even when he doesn’t sing, this venom still pours forth from the grooves and is evidently directed at all forms of hypocrisy and cant, a direction which any honest punker should launch themselves on. A title such as ‘Violet Piss in Snobbish Eardrums’ might clue you in to the peculiar way in which the bilious sentiments of GR manifest themselves, in an imaginative manner well beyond the reach of the Chocolate Watchband or any given Johnny Rotten impersonator.

Then there’s his “haunted” guitar style, well enriched with reverb and echo, and plucked with the obsessive drive of a man driven by revenge through fuzztone. Just listen to side A of this LP for five strong post-punk minimal-rockabilly stompers that’ll make your Pebbles LP collection wither into shrivelled weeds. His drumming’s good too. And he does live drumming, not drum machines, which may be one of his secret weapons. The other secret weapon is to use recording tape instead of digital, but we’ll get to that. Things get slightly more bonkers on the B-side, where there’s less guitar and more effects, reel to reel tapes and organ playing going on; one might almost deem it “experimental”, except GR seems to know exactly what he’s doing. The title track alone, some 5 ½ mins of determined organ drone and unhinged drumming, automatically qualifies for the “warped krautrock” tag. There’s also the sheer weirdness of ‘Quarter Inch Creeks’, the work of a man who can make his Revox tape recorder perform in the same way as a boiled lobster at a seance.

I sincerely hope he still does everything with quarter-inch tape and cassette tapes, as we lost an awful lot when we surrendered to the inevitable rise of the digital workstation. I will leave you with a testimony to the greatness of GR as penned by Billy Miller: “I walked with Gregory Raimo in the alley-ways of circumstance. From the gate it seemed strangely dream- like. On this trail of shadows he never walks alone. The crocodile guardians of the outer mind sway quietly to all this in the zombie realm. G.R. will lead the way when following finds a slow day.” Buy! Buy! From 6th January 2017.