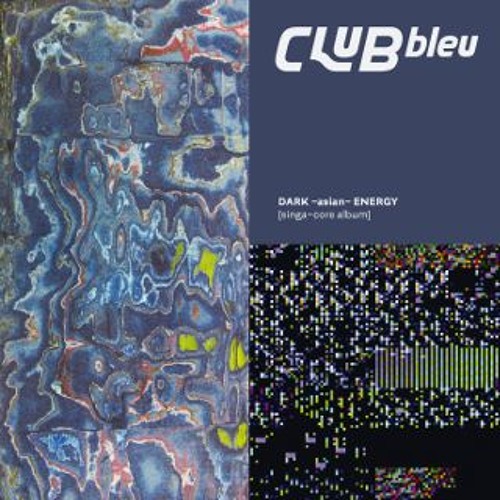 Enter the 8-bit pixelated world of Nintendo GameBoys, cracked software for Atari ST and day-glo colours. This is music that actually sounds like the cyans and magentas decorating the giddying design strategy of the accompanying booklet. It is part of The Sound Art Series by Gruenrekorder. Like me, you may surprised at seeing this kind of music appearing on Gruenrekorder which I had previously thought of as mostly concerned with field-recording, but whom now seem (doubtless due to the parlous economic strictures affecting all independent labels these days) to be branching out into other areas – in particular, Gruenrekorder diversify into the nebulous fields of “SoundScapes” and sound art. DARK~asian~ENERGY is as much sound-art as experimental pop music. A rollercoaster ride.

Active since 2012, CLUBbleu are Felix Leuschner and Julia Mihály. Felix Leuschner is a classically trained percussionist and a composer with an interest in music theatre and chamber music. Similarly, Julia Mihály describes herself as a “composer-performer”, so it is clear that they are both comfortable working in performative ways. In fact, during 2016-2017, CLUBbleu are Artist In Residence at the State Theatre Darmstadt. CLUBbleu are also painfully contemporary – judging by the explosion of vivid colour on their website, it might be reasonable to assume they prefer to dress in man-made fibres. They admit to the (mis)use of “…game controllers, motion sensors, e-drums…live electronics with field recordings and analogue synthesisers…”, and their main aim appears to be “…the re-definition of interactive electronic chamber music in connection to elaborate forms of musical scores…” There is a total absence of any evidence of “scores” of any kind, but as with many artists, we are expected to suspend belief to a certain extent, and that is fine. They both use Max/MSP; interestingly, Leuschner uses his drum kit as “…a real-time controller for real time sound synthesis”. On paper, all this just looks like manic box-ticking, but CLUBbleu reap interesting results as we shall see.

The delightfully-titled opener “Bambi Died Of Lung Cancer” is like being trapped in a broken elevator with the Chinese Olympic table tennis team, a malfunctioning office photocopier and DJ Scotch Egg. I’m a big fan of dim sum, but track two “Charsiewbao” is unlike any bao I’ve ever tasted; a dizzying morass of MaxMSP patches and micro-samples all firing off in clusters in our water supply. Sometimes there is rhythm, sometimes there is not. The third tune, “Singacore Sling” leans heavily on an Indian music sample – the liner notes describe the constituent parts as Diwali music alongside Chinese pop and percussion sounds recorded (presumably by the duo) in and around Singapore. Diwali is the celebration of the new year; it is unclear whether there is any significance to our intrepid duo, however. “Chicken Feet And Durian” contains repetition of what sounds like the word “gurnard”, which may or may not be my imagination. Later comes the unmistakeable sound of an electric typewriter – although whether the machine in question is an Olivetti or Smith-Corona is not stated in the accompanying text. “Marilou’s Dream” also intrigues. Are they referring to Marilou Henner, star of American comedy Taxi? If so, why? Perhaps it is Marilou York, wife of Star Wars actor, Mark Hamill? Either way, there’s some nice long spooky dub echoes. Plus some corny television advert vocal samples from the 50s, which will please fans of that sort of thing.

By the final piece, “Toxi Timah”, Leuschner and Mihály are throwing field recordings, German speech snippets, city centre noises, whistling, and the sounds of a market into the mix. They do take the pace down a bit here, but by now I’m feeling pretty exhausted. Talk about science fiction dystopias, but in many ways we’re already there. CLUBbleu are the soundtrack. It is an all-out assault on the senses; all the sounds on this album are crisp, well processed and recorded. Expensively recorded I’ve no doubt. Solo, Mihály is apparently an arresting presence on stage, although having not seen CLUBbleu live, a quick search through YouTube revealed a nice line in back projection, but nothing particularly visually remarkable on offer from the physical presence of the duo themselves. Of course, the musical area they are working with here is not without precedent – the early 2000s Breakcore scene at one end of the spectrum and the rigorous sample manipulations of John Wall at the other. Interestingly, CLUBbleu themselves cite their own influences as TripHop, Clicks&Cuts and Death Metal.

Presented in a digipak with aforementioned booklet containing deliberately misleading/nonsensical liner notes. Here’s an example, describing track six “Snap To Grid”: “A question of attitude! Snap to grid or snap to objects? Two artists, one MAX patch. Jean-Paul Sartre would have loved this.” No, me either.