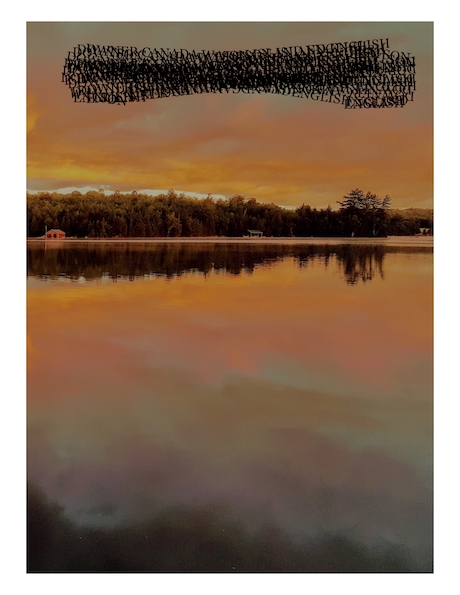 Another great record from Kevin Cahill under his Downer Canada alias. Watson Island English (READING GROUP RG05) is packaged in a DVD wallet with some seascape photos and some quite nice experiments in typographical design, involving overprinting or overlays which border on the sort of thing I’ve seen in my book of Typewriter Art, where conceptual artists and poets used the common typewriter to produce interesting patterns or concrete poems. Plenty of overlaying in the sound, too; Kevin Cahill is credited with “recording/collage” and I suppose what we hear is various field recordings superimposed on top of each other. In the resultant array, I think we can hear water, motors, a harmonica playing, and someone reciting poetry or just speaking some unrelated prose, most of which is distorted and inaudible anyway. At one level it might be taken as the sound document of a trip by boat, but the traveller’s thoughts and distractions are also audible – as if Cahill had invented a tape-recorder powerful enough to monitor, and document, the innermost thoughts of the brain. Maybe he has.

What I enjoy about this, as with the other few works we’ve heard from this fellow, is the density of the work – he generously provides a lot of sonic information to process, and the listening surface is never less than overloaded, often compellingly so. It’s also fair to say he presents an imaginative take on the world, rather than a “realistic” one, as so many phonographers claim to do. He may use documentary sources as the starting point, but the finished work is always personal and rich with idiosyncratic detail. “Two vaguely symmetrical tracks expand downward into strata of tape noise,” is how this release is described. Cahill himself describes his process here as “aiming but aimless”, which is as far as he’ll apparently go if asked to align himself with the slippery area of psycho-geography. I’ve often found him reticent to explain much about his releases, which can only be a good thing. Savour the mystery, and let it contribute to your enjoyment. If you can get a copy, that is; only 20 copies of this CDR edition were released. Arrived 19 July 2017.