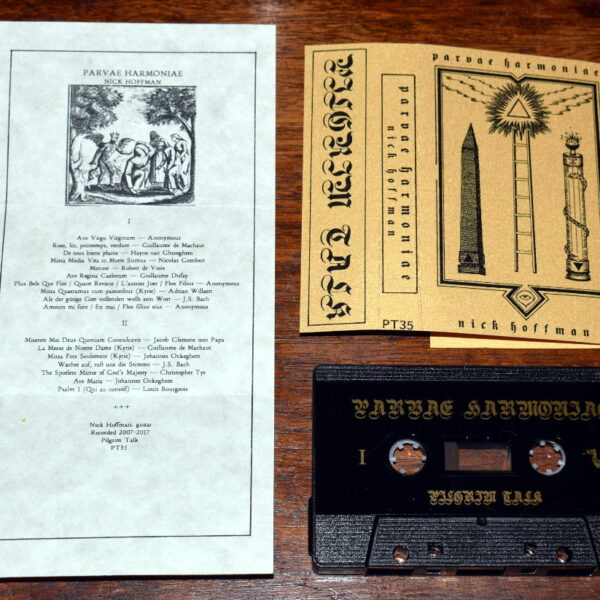 Nick Hoffman’s stock continues to rise in our estimation. We’ve always enjoyed his near-blank and puzzling improvising works, often in collaboration with cutting-edge Asian players, and his contribution to the Satanic Guitar Rock genre (the Back Magic duo), and of course his superb drawings on the covers. With Parvae Harmoniae (PILGRIM TALK PT35), he’s only gone and recorded an album of early classical music, surprising everyone with this unexpected move. What’s more it’s played and recorded brilliantly. Over a dozen short pieces by composers such as Guillaume De Machaut, Nicolas Gombert, Johannes Ockeghem, Christopher Tye, Guillaume Dufay…in fine, the cream of European 15th century composers, missing only Josquin des Prez (who might be a bit too “famous” to be considered for inclusion). And of course J.S. Bach. “I feel like western music has been steadily deteriorating since Bach died,” he told this magazine in 2012. Now I realise I should have quizzed him further on this particular point.

Hoffman plays guitar for all of these pieces, recorded over a ten year period beginning in 2007, I think perhaps overdubbing himself once or twice (unless he really is that gifted to sound like two guitarists at once) and maybe adding some slight echo effect on ‘The Spotless Mirror Of God’s Majesty’ by Tye, in order to more resemble the sound of a Renaissance organ in church. There are some sonic details however which continue to connect this to the world of Hoffman we know and love. Firstly, the recording quality which includes a good deal of “room tone”, as I would call it; a natural echo which gives the impression of a hermetic musician playing only for the love of his arte in the face of an indifferent world, cloistered in some tower with an elaborate pavement and heavy drapes. This approach means that Parvae Harmoniae has a strong audio presence, one that almost puts the listener right inside the body of the guitar, and thus departs from the conventions of how early music, or indeed most classical music, “ought” to be recorded according to the restrictions observed by many mainstream labels and companies.

Secondly, the precision in the execution is something that followers of C. Joynes will appreciate, that technique that allows very clear ringing tones and no mistakes in the fingering. Again, I expect that “proper” classical lutenists and guitarists like the great Julian Bream would be horrified by Hoffman’s deliberation, his lack of grace notes, his sturdy and near-inflexible style. It’s just right for me, though, and I think it really suits the music; no superfluity, no unnecessary embellishment. Lastly, Hoffman has packaged the release decorated with his usual artwork and typographical tics – the “gothic” font, the symbolic motifs sampled from old books of engravings, both lending a vaguely supernatural or esoteric edge to the release. Even the cassette card is printed on gold card stock, the supreme touch; this is a cassette worthy of an alchemist. This item may not be to everyone’s tastes, but if you’ve ever heard and enjoyed one of those impressive Harmonia Mundi LPs which showcase this period of early music, be prepared for a treat. If he stuck with this line of work, Hoffman might just stand a chance of doing for de Machaut what Glenn Gould did for Bach! From 13th July 2017.