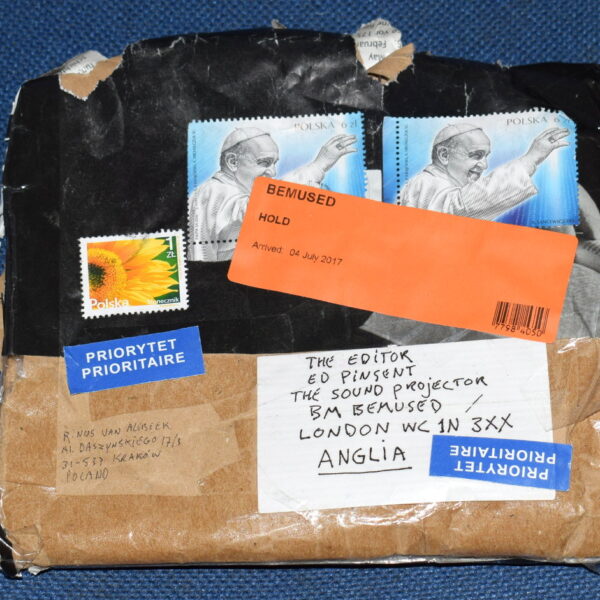 Received two more cassette tapes from Rinus van Alebeek and his staaltape label 4th July 2017. Here is the first one.

Unit Audio is by Ben Roberts, a creator we have not heard from before; English, living in Madrid. He’s a collector of of old magnetic tapes for about as long as he can remember and is apparently holding a “huge archive of found tapes”. This may mean he’s not unlike Mark Vernon, another UK tape-hoarder and manipulator who we recently noted with his LP of findings from flea-markets. Like Vernon, Ben Roberts is interested in tapes that have been discarded, neglected, or forgotten; and like many tape machine buffs, he loves glitches, artefacts, machines going wrong, and these mistakes and errors contribute to the surface effects of his art. Besides Mark Vernon, I’m also tempted to liken him to Fossil Aerosol Mining Project, whose LP for Helen Scarsdale is a classic entry in this “genre”; they too scavenge for lost reels (and include cinema media in their hunting sessions) and “physical disintegration, damp, tape-rot, poor splices, scratches, dropouts and accumulated dirt, dust and grit” are all welcome additions to their aesthetic. 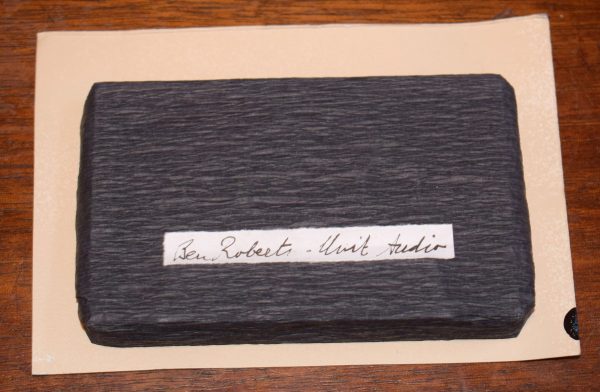 However, the Fossil Aerosol people are quite benign, passing on a very optimistic and nostalgia-tinged view of the past with their sound art. Ben Roberts does this too to a certain extent, but he also seems to be seeking something rather less obvious, signs less commonplace. I might even say there’s a faintly cruel and unpleasant side to the things he uncovers through his methods. He may exhibit an interest in the past effluvia of our civilisation, but he’s decidedly ambivalent about whether or not these things are good. At least twice on this tape I felt I was hearing something I really should not be hearing; I have no idea what the source for it may have been, and I don’t want to know. Unsettling, nasty even. Again, Mark Vernon has veered close to this darker side himself on occasion, through retrieving dictaphone tapes and answering machine messages which probably should have been erased a long time ago. This is evidently a powerful method for reaching a psychological depth which is otherwise hard to access; and it’s more than just a simple “confessional”. Somehow these tapes allow us to see the cracks in the mask, see through to a more profound truth, one which may not even be especially palatable. At one point on side one of the tape, there’s a slowed down voice simply listing years: “1973…1974…1975”. There’s something ghastly about the tone of the voice that nauseates and terrifies; it’s the sound of a time-barrier to the past being opened up, but we don’t want to go back to the 1970s. It might be a very unpleasant time. In this moment, Unit Audio issues a stern corrective to those of us (myself included) who wallow in nostalgia for a so-called golden age. Be careful what you ask for, says this voice, I might just transport you back there. 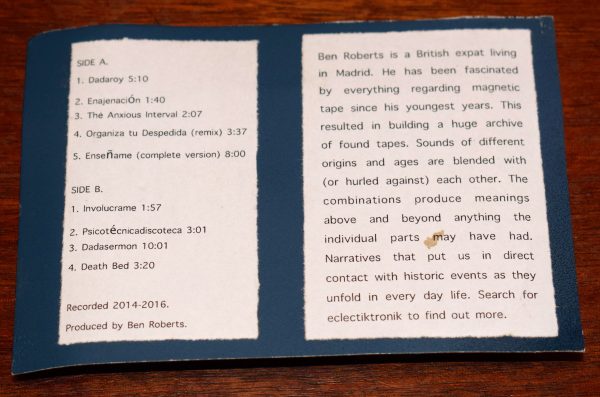 Unit Audio is not completely a nightmarish experience, though. For the most part it’s simply eerie – with its careful juxtapositions, edits, loops and tape-mangling actions, it succeeds in representing the real world through a decidedly skewed lens, a vast distorting mirror. There are things we can recognise – snatches of pop songs, extracts from film or TV soundtracks. Such moments serve to anchor us in some sense of reality, while Ben Roberts continues to spin his imaginative fictions. Perhaps “mangling” is too strong a word; van Alebeek is, I think, quite right to praise the “delicacy and awareness in attitude towards the use of found material” in this work. There have been plenty of people doing the shock-value thing with collision edits and wild juxtapositions; their work doesn’t have much impact after the shock has worn off. Van Alebeek has never, to my knowledge, entertained such a creator on his label.

The tape is presented to us as “combinations that produce meanings above and beyond anything the individual parts may have had.” I think this is highly significant; it might indicate something about how we shape our culture, assigning meanings to individual fragments of experience. Maybe nothing really happens to us at all, unless we can turn it into stories or fictions of some kind. After all, every sociologist and his wife are always telling us we need narratives to “make sense of the world”, as they so patronisingly put it. What interests me about this tape by Ben Roberts is how we stand a chance of seeing that very same process in action. If he has done this, it’s a remarkable achievement.