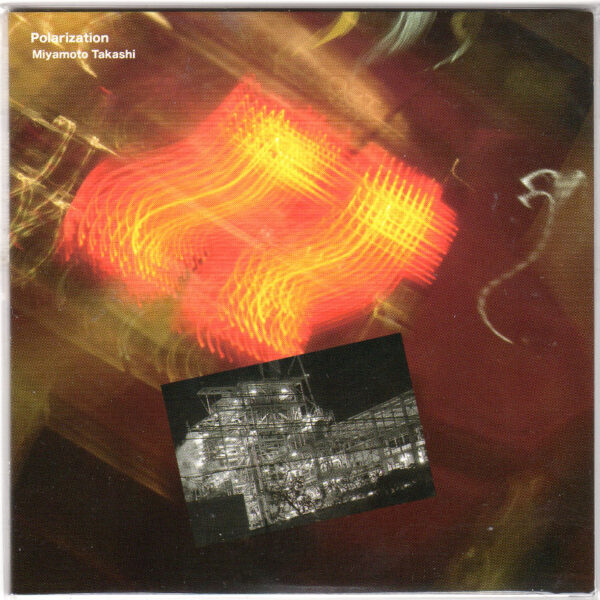 No. 5 in the series. Takashi Miyamoto has been active since 1985, performing in indie rock groups in Tokyo, then with the jazz-rock group Time Strings Travelers. More recently he’s been working as a technician for the Jigen Production label, in which capacity he worked on records by some personal faves – including Magical Power Mako, Che-SHIZU, Otomo Yoshide and Charles Hayward. Polarization (KYOU-005) is his solo record of electronic ambient drones, noise, tunes, and textures, many of them given exciting titles such as ‘Some Camera Eyes’, ‘Ancient Dreams’, and ‘Ships at Overground’. This one’s good, but not quite as focussed as what we’ve heard so far; one feels that Miyamoto is trying out too many ideas, styles, or approaches, and the album’s a bit of an ill-fitting grab-bag of oddments, snapshots from his travels to other dimensions. Once he gets started, he doesn’t do very much with the track apart from demonstrate its clever switches and tricks and tics for some 3-4 mins, then fading it out. However, the production is impeccable; he creates a compelling rich surface sound, brilliantly executed and well-recorded, however abstract the content. YUKA created Li-lan (KYOU-006), the sixth release so far in this series. She is notably the first woman composer in this all-male series. She’s a fairly recent graduate from Osaka University of Arts and she won the Futura prize for computer music in 2013, for the piece ‘As A Luminograph’ which is published here. With a mixture of field recordings at selected sites and Japanese flute music, she creates very distinctive and imaginative work, very much in touch with nature, and with never less than beautiful results. ‘As A Luminograph’ is quite the dazzler. Well, elements such as fireworks, traffic sound and birdsong might all be considered rather commonplace in the phonography field, but wait till you hear what Yuka does with them; she finds consonances and patterns that most experienced practitioners would never even dream of, then assembles her ideas with a rapid-fire digital edit technique that’s as sharp as a needle. ‘Calm Flow’ is the sho/flute recording, heavily treated with I think varispeed techniques to create a light psychedelic mood and overlaid with a chaotic percussion track of bracelets and necklaces. ‘Footsteps’ makes plain that anyone who works in this area these days is indebted to Luc Ferrari; it was made using materials from his personal sound archive and was an entry to the Presque Rien prize. I didn’t even know there was an award named after this most famous of musique concrète records, but it makes sense that there would be one. On ‘Footsteps’, Yuka exhibits her slightly restless editing style, combining sounds and compressing the action of what can be read as a murder-mystery radio play in schematic form. Lastly, there’s ‘Round Shape’, which might be described as the ball-bearings of François Bayle rolling around the floor accompanied by a piercing, attenuated whine from one of Stockhausen’s shortwave radios in a bad mood. I hope we hear more from this talented creator in the future; this is a strong and very promising set of work.