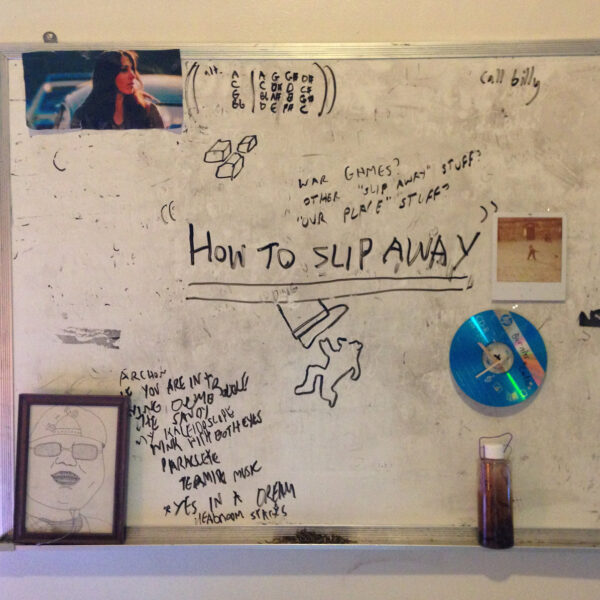 How To Slip Away (OSR TAPES / ICY CLOWN ROAD ICR00) is another excellent album from Zach Phillips, the Brooklyn-based singer-songwriter whose various projects have been entertaining us and stimulating our minds for some years now. His sheer productiveness never ceases to amaze me, likewise the evident facility with which he puts together these impressive records characterised by their tricky, inventive melodies, and elaborate and dense lyrical content, richness which is belied by the pared-down instrumentation and laid-back approach with which the songs are performed.

On this occasion, the 20 short songs were apparently written by Zach on the piano and then “re-arranged for layered monophonic guitar”. This is the first time I’ve gained any insight into his composing methods – transition of a song from piano to guitar is a fairly simple one, I suppose, but I’m always interested to learn of such things (which is why we’re so interested in the origins of Beatles songs, for instance). The songs are then sung by guest contributors – I think there’s a different one for each song – Sarah Smith, Alexis Graman, Kalmia Traver, Nick Baker are at the top of a very long list. A man who has friends is never alone. This may be one factor that accounts for the volume of Zach’s output – presumably he’s a gregarious fellow who, like Andy Warhol, is able to motivate friends and collaborators in a way that a “lone genius” introverted type would struggle with. On the other hand, there aren’t many profound differences in the vocal delivery of these 20 contributors, so I guess they weren’t encouraged to bring their personal stylings into the studio. Maybe Zach has a fairly firm vision of how his songs should be performed.

As ever, these songs (sung in very noticeable white-bread American accents, every syllable pronounced precisely just-so) superficially resemble “classic pop” records of the 1960s, which always prompts me to compare this music of Zach’s to everything from The Monkees to The Cowsills by way of The Beach Boys. But then you hear the strange, allusive and possibly subversive lyrics, their barbed messages woven expertly into the tight melodies, and realise no top 20 record or Billboard hit ever aspired to such intellectual intricacy, such rich ambiguity. I think Zach’s distinctive contribution to culture will come to be seen as a very unusual form of avant-garde composition, disguised as pop song – or perhaps the other way around. This release also is presented as a conceptual suite of some sort, the separate songs tied together by a between-tracks narration spoken by Colin White. I wish I could tell you what it all means, but the core meanings of Zach’s work always elude me, and will take more time to digest and study properly. He has a cunning way of deflecting the mind with these odd lyrics, unconventional melodies, and unexpected intervals. From 4th July 2017.