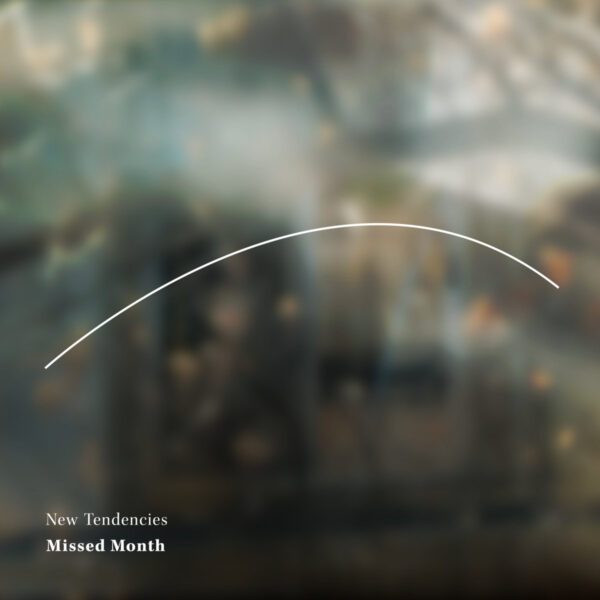 From Toronto we received a nifty cassette of analogue synth goop by New Tendencies, the performing name of Matt Nish-Lapidus. He made Missed Month (FORKING PATHS RECORDS) in the space of four weeks, hence the name, finding himself in the middle of a creative burst of musical outpourings for this time… “experiment” and “exploration” were his guiding lights as he played his home-built analogue synth device.

On Side A we’ll enjoy some “poppier” treats, where the mood is not exactly upbeat but we can catch a lungful of the creative fresh air New Tendencies is hoping to breath in. These tones, textures, patterns and rhythms may appear unassuming and modest at first spin, but I like the way they keep on pressing away at the panes of glass that surround their creator, as though he were releasing small animals into the space who use their paws and pads to find some means of egress. This may reflect the “anxiety and uncertainty” the Nishster was undergoing during this month, evidently finding some way to turn his pains into art. Did I mention there are also beats and sequencer riddims, though not of the sort you’d find anywhere near a dancefloor situation…instead the plan seems to be to set up irregular, herky-jerky hoppamaroos that wrong-foot the prospective hoofer and keep the ear guessing if, like me, you’re sat on an armchair.

The stand-out track just might be ‘Friday’ on side two, since it reverses the album’s strategy completely in favour of peculiar hammering effects in a distinctly stark setting with many weird tones and ambiguous bleatings. It’s good to hear someone making the old analogue parperoo perform in the way that nature intended, raw and unadorned with no studio production or added FX. The long track ‘Sunday’ is something of a chiller to close out the session with, veering nearer to the broad church of “Cold Wave” or one of its many variants; this eerie ruminator wouldn’t have sounded out of place on any given DIY bedroom cassette released in 1982, bejabbers, and is all the more appealing for that. A charming set of miniatures..from an edition of 50 copies. Arrived 27 July 2017.