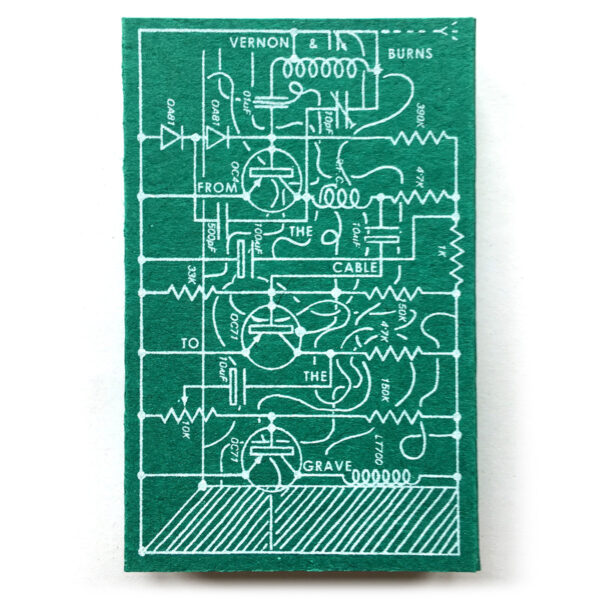 The team of Vernon & Burns are old TSP faves. Mark Vernon and Barry Burns have proven themselves as unique custodians of an odd method of tape assembly, drawing on their eclectic collections of highly unusual sources, and enriching the results with a decidedly low-key English humour. That’s to say nothing of their populist-absurdist view of the world and all its tedious details that mean so much to us; they’d probably lean more towards the world of Tony Hancock than Samuel Beckett, but there is a core of disenchanted whimsy to be found threaded through most of what they record and release.

Many if not all of the above characteristics can be discerned and savoured in today’s offering, a cassette tape and download called From The Cable To The Grave (AKASHIC RECORDS AKR007). That title alone neatly combines two of their interests (technology and mortality, or at least human frailty) into a neatly-filleted pun. The same abiding themes have been engrained into the 19 short tracks you will hear, a deliciously bewildering journey through the dead-end streets and back alleyways of a forgotten time in a non-existent borough of the UK, one probably lurking somewhere between the dark November fog of Wolverhampton and the dreariest suburbs of Middlesbrough. Impressions of black and white photos, faded fashions, defunct colloquialisms and now-closed services and establishments.

Vernon & Burns once again concoct a radiophonic play without words, a many-layered shifting narrative without characters, whose exact contours are diffuse and shape-shifting. This is achieved through strange electronic music, snatches of sampled voices, and a very unobtrusive editing technique. This method is one of the primary strengths of this pair; if they were film editors, they could move a character on the screen from Mars to Arabia and back again by way of the catacombs of Paris – without anyone even spotting the joins. A bittersweet experience, but as meditations on death go, one rarely finds such meticulous attention to detail, such gentle and not-inappropriate humour, and such compassion for the foibles of the human race (which is more than you might get from a philosopher or stern moralist addressing similar themes). To use their own description of this item: “excerpts from the minutes from the AGM of the Dream Prognostication Circle & Astral Radiation Trance Club.” I think that says it all. Released in one of two variant silk-screened covers. From 22 August 2017.