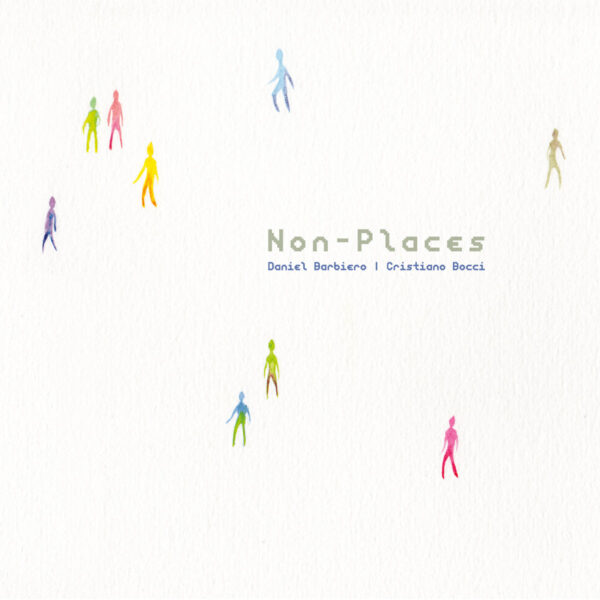 Excellent piece of work by Daniel Barbiero and Cristiano Bocci on their Non-Places (ACUSTRONICA) album, an interesting and engaging piece that crosses composition with performance and melds them seamlessly with field recordings, in an effort to comment on the nature of modern urban spaces and our place within them. We’ve heard these two in 2015 with their Nostos album, which was a beautiful work and involved some of the same processes and techniques; but Non-Places is a much more complete and fully-realised manifestation of their approach. The premise is that a “non-place” is a public area found in any modern city whose purpose is mostly “commercial”, and one that “imparts a sense of anonymity or displacement” to anyone who passes it through it.

For their target zones in support of this thesis, Barbiero and Bocci made recordings of subways, airports, and stations (though not shopping malls, apparently, which would be the first place I would have placed my recording mics). Musical performances (double bass, electric bass, electronic music) were layered on top of the sounds, and Bocci is credited with much of the assembly and mixing of the finished work. Well, they aren’t the first people to remark on “non-places” in modern urban planning – one person I always wanted to hear more from was Bernd Friedmann, who recorded as Nonplace Urban Field in the mid-1990s and I believe has many trenchant observations to make about the dead ends and alienating zones that town planners were accidentally creating for us, through negligence or bad design. Neither are Barbiero and Bocci the first to bring their instruments into an unusual outdoor setting. But this Non-Places record is a real success, communicating some strong ideas about modern disaffection, expressing perfectly the sense of purposelessness and disorientation that many of us feel (I do at any rate) when arriving at a station or passing through the ghastly commercial trappings of a modern airport.

The sound of fellow human beings talking and moving around ought to provide us with some comfort, but on this record it’s become a background blur, very much akin to the sounds of the crowds in THX-1138. You can feel yourself blending into this mindless blob of conformism, yet the music keeps urging you to pull back, reminding you of your own personality and individuality. Of course, this might not be exactly what was intended; for a more detailed rationale, you need only read Barbiero’s annotations for the project, which are also reproduced online. He advances the notion of the “atopia”, an inversion of a Utopia, a “place that doesn’t exist”, and “a nowhere that is here”. One of the most successful illustrations of the theme on this record is the long ‘Turnpike Suite”, a piece in two movements, where the subtle sound treatments are just perfect in the way they convey something going slightly wrong, and getting imperceptibly worse, without allowing you to pinpoint the source of your unease. A true train ride through a modern hell of anonymity. Less successful is the ‘Bruxelles Gare Du Midi’ piece, where it seems to me that Barbiero is trying too hard to improvise something that resembles “train” music, and even ends up playing in time to the internal rhythm of the field recordings. Me, I like it better when there’s a strong disconnect between the music and the phonography, and waves of alienation gradually sweep over us. The composers/players have identified a real modern problem, and developed a set of well-crafted pieces that illustrate it unmistakeably. From 20 September 2017.