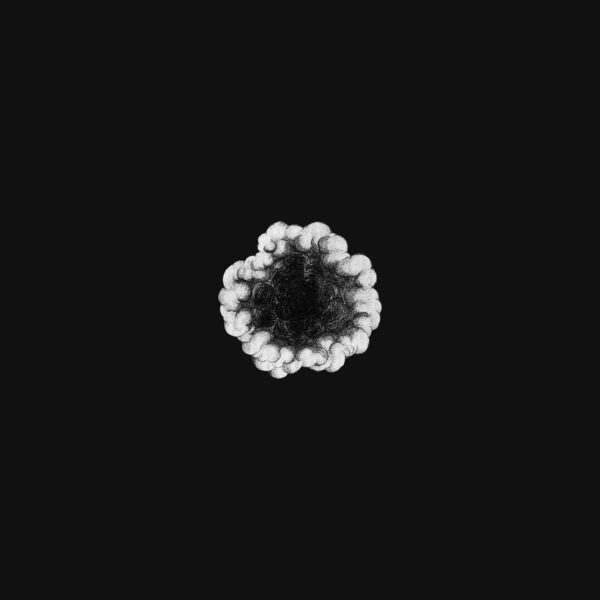 Another item from the unusual Athens label Holotype Editions…this one is a live document from the UK’s Cafe Oto capturing a performance by that outré vocalist Ghedalia Tazartès, and the talented singer and performer Maya Dunietz. Schulevy Maker (HOLOTYPE EDITIONS HOLO7) carries a title which is a near-anagram of the Shoemaker-Levy 9 comet, a fact whose significance is not entirely clear to me, but the story of this comet’s life (falling to pieces and colliding with the planet Jupiter) does have spectacular and extraordinary aspects which are not inappropriate to the music on offer. I’m also reminded of how, in pre-Enlightenment times, comets were regarded as portents of all sorts of unwanted change and disruption in life.

Tazartès records have been showing up here over the years – I’ve never seen him perform on stage, but I would like to think he holds forth with a presence that is both charismatic and aloof. He doesn’t disappoint here with his surreal, unintelligible, multi-syllabic groans and bellows, and it’s a much more lively eruption of strange human passion than we found on the subdued Polish record The Carp’s Head. Maya Dunietz has crossed our paths precisely once, on the astonishing Summer Crash record (noted here). I wrote then of her uncanny similarity to Yma Sumac, and see no need to rescind my position today…not just the dramatic sweeps of her operatic voice, but even the instrumentation (which she provides, I think) on Schulevy Maker sometimes resembles a “lost” Yma Sumac record (produced by Les Baxter, natch), except that it’s warped and darkened through its inter-dimensional travels.

Side One of this LP seems to have been realised with live piano and samples, and if it’s “change and disruption” you want, then you could do no better than enjoy this powerful rollercoaster ride through an alternative musical history, a non-stop performance which is characterised by sudden shifts in mood, timbre and temperament, freely mixing a form of twisted easy-listening lounge music with heavy-metal guitar samples and noisy blasts. Throughout, the two singers delineate their strange visions as though it was the most natural thing in the world, exhibiting neither horror nor surprise in the face of the gigantic monsters they conjure up in sound. One Side Two, we start off with in a slightly more “acoustic” mode, where only a piano and bells accompany the two singers acting like the world’s most mismatched pair of cocktail-jazz crooners rehearsing for a gig in Las Vegas. But by mid-point, we find ourselves back in the surreal world of juxtapositions and misleading information, as the chattering samples and other effects seem to whisk us along into somewhere that’s a cross between a techno nightclub and a Vietnamese bar around the time of the fall of Saigon. It’s disconcerting, even a little alarming. You may find yourself breathing a sigh of relief as the remainder of the LP settles into treading water for a few precious moments, with some vocalised drones and croakings that out-perform even the most throatiest of LPs by the much-vaunted Phurpa. Even this doesn’t last for long, as we’re swept into a dramatic finale that’s as much informed by Hollywood epic movies as it is by the eclectic musical tastes of this pair. Truly one of a kind…from 30 August 2017.