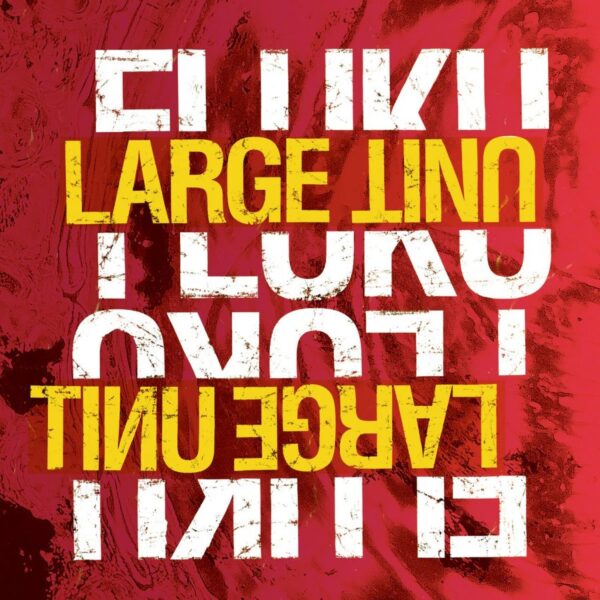 Overpowering free jazz by Large Unit on their Fluku (PNL RECORDS PNL038) album. The Ensemble is led by Paal Nilssen-Love, the drummer, and it’s released on his own label; open the gatefold of this mini-album sleeve to reveal the 12 players, some with glasses, some with beards, some leaping for joy. A strong brass and woodwind section is bolstered by two bass players, two drummers, and an electric guitar; there’s even some live electronics in the mix. No denying the team are very strong on extreme dynamics; the long title track may start out as a sustained series of powerful wallops to the bread-basket, but shifts dramatically around its midriff and allows for contemplative sighs and moans from the more introverted instruments in the Unit. When they go up-tempo, and they often do, it’s hard to think of it as pure “jazz” really; it’s more like very simple rock riffs repeated over and over, with opportunities for crazy soloing bolted on. To put it another way, the possibilities for musical development and exploration afforded by chord changes, modulation, or arrangements are not exactly top of the agenda with Paal’s men; the preference is to work the rather basic musical figure into the ground, and see where all the flailing and thrashing might lead. I would level this criticism even at a tune like ‘Happy Slappy’, which may appear to be open and free-form, but is still over-determined by the percussionists in the band and results in hemmed-in, constricted music; wriggle as they may, many of the players are still pressed against a fence and the slaughterhouse manager nearby is calling them in. Even so, there is some very tight playing on offer from these gifted Norwegians, and the overall sound of Large Unit is positive and upbeat. From 20 October 2017.