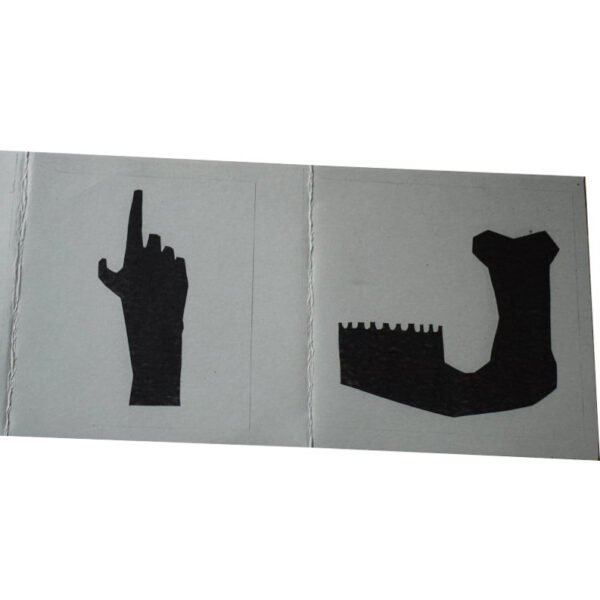 A couple of Yol-related items in this post. Yol is the very distinctive noisy DIY-genius with a rasping voice from Hull who we have noted previously for instance with his solo record Cordless Drill Face Separation Anxiety. Neck Vs Throat Volume 3 is a CDR which has been sitting here since 31st August 2016. Neck Vs Throat is pretty much Yol plus Miguel Perez; Yol does his voice-based performance thing while the Mexican guitarist Perez creates utterly non-musical and formless noises on his instrument, audibly mauling the strings in unorthodox ways. “It’s a file sharing project”, explains Yol in the enclosed letter with this item, “What with Miguel living over in Mexico. For this one Miguel would make a guitar track, Joe Posset would mangle it and finally I would get it and play it through an amp, going over it in real time to try and get a ‘live’ sort of feel to it.”

Yes, did I mention Joe Posset is involved? Credited here with tapes, the role of this Newcastle noise-hero is clearly outlined in the above workflow provided by Yol. I haven’t yet heard the right Posset recording (there are a few to choose from, I gather) as I find his work difficult to process…but I live in hope. Also on this record, we have Pascal Nichols who drums a little bit on ‘Gather’. None of this collaboration dilutes the central proposition though, and this has all the qualities I have enjoyed with Yol’s work – near-confrontational performance art, the vocalist baring his soul and writhing in apparent pain as he suffers the slings and arrows of modern living. Evidently the forces of oppression have ground down his spirit to the point that all he can do is spit out disconnected phrases between clenched teeth, in a perpetual state of frustration and anger. What recognisable phrases make it to the surface are either pointing an accusatory finger at the Enemy (e.g. the police) or are just absurd, such as on ‘One Of Your Five A Day’, where this simple dietary requirement is repeated out of context until it becomes a bitingly sarcastic riposte to the benign doctor or health advisor who must have been foolish enough to proffer this advice to the arch-refusenik Yol. Throughout, Miguel’s guitar sound oozes sheer angst, like frayed nerves laid bare after a severe whipping to the hide. If you want to plug in to something rather unpleasant and abrasive, but also something very real, this CDR is one source that’s a direct connection. Great!

I almost failed to mention the woodcuts on that release’s cover. These are also by Yol and have the same directness and clarity – an awful clarity – as his music, readable also perhaps as potent symbols or magical charms, part of a visual hex. I mention this as a prelude to Hand Of Glory, another CDR which we received on 8 September 2017. Here the images of animal skull and horse’s head are aligned with the shocking image of the hand, directly referring to that grisly ancient rite where a hanged man’s hand would be severed while he hung from the gibbet, dipped in wax and made into a candle. I believe one use for this grisly thing was to cast a spell on your enemy; you could leaving it burning in their room and they would succumb to a terrible sleep, or worse. Without wishing to labour the point, I can detect a side of Yol that wishes to exact revenge on former opponents, using whatever rough charms are at his disposal.

On this solo CD, we have the same confrontational attack-mode in the screeched vocalising, accompanied by ramshackle makeshift percussion (from boxes and crockery, by the sound of things) and even a piano, random notes sounding in a desultory fashion. Compared to the fragmented, broken-language approach of the above release, Hand Of Glory’s texts are positively articulate; Yol almost seems to be reciting entire poems, so lucid are the sentences he forms. ‘Street Food’ for instance emerges as an impassioned but well-argued attack against the stupid food carts that sell pretentious wood-baked pizzas and falafel and such in modern Britain; Yol sees nothing but junk food, sausages sprawled all over the pavement, and conveys an alarming sensation of urban chaos in just four minutes. The title track also has a sort of rough literary cohesion; not that it’s likely to be published by Faber any time soon, but the simple repeated phrases somehow strike us to the heart: “At the sound of gunfire, get out the hand of glory, light the candle…there isn’t an emoji for this yet…” He pitches this chilling utterance interspersed with spastic grunts and groans and wild roars, lapsing into babble like one possessed; and the musical backdrop is an evil, high-pitched whine. Three minutes and 23 seconds of black magic terror right there in your home; book your own exorcist.

Also of note: ‘Of Course All The Sirens’, where Yol appears to be playing something that’s a cross between an electronic kazoo and a balloon-operated synthesizer, puffing into the neck of an instrument as though his life depended on it. That “ancient language chanting” he refers to scares me; as though he’d travelled time like someone in an Alan Garner story or an episode of Sapphire & Steel, and seen more of our primordial ancestors than he wanted to. “Soothing music for troubled times. Or not,” states Yol in his enclosed note. While no-one could ever replace our beloved dark seer Mark E. Smith, Yol’s inclinations and passions seem to be cut from a remnant of the same cloth, and I can recommend his work to anyone who owns a copy of Dragnet and enjoys the Lovecraft-Machen reading side of Smith.